My scanning partner thoughtfully named this photo "corpse stew." There are sliced okra in the stew, and whole ones in a bowl off to the side. That's too much okra in one year. The tri-colored rotini is an inspired, festive touch, though. In combination, the whole presentation gives an air of post-digestive creativity. Did you think this was going to just be called Hamburger Pie? Me neither. It's a "tasty one-dish meal dressed up for company with golden fluffs of potato and bright tomato slices." It also has green beans, onions and canned condensed tomato soup in it. Plus about a speck of seasoning. People were afraid of seasoning back in the day. But they weren't afraid of putting green beans in meat. Oh, if desired? You can sprinkle potatoes with "shredded process American cheese" before baking. This way, every food group is represented. Yum.

As a bonus to the recipe, the cookbook writers, in a separate section, instruct us in making our dish look just like the photo. This involves adding the sliced tomatoes on top, sprinkled with yet more cheese.

Some stuff on top of fish

These are sort of fish rafts topped with some kind of stuffing, but it looks like raw ground beef in this photo. Unfortunately, printing inks being what they were, it looks like Steak tartare au fromage sur poisson. (raw meatloaf with cheese on top of fish. Everything sounds classier en francais, doesn't it?) It doesn't quite look "graced with" the sauce because that's all spilled over the sides and congealed. But you know this dish really made an impact when it was brought to the table. Especially if it was served for guests. They're probably still talking about it. 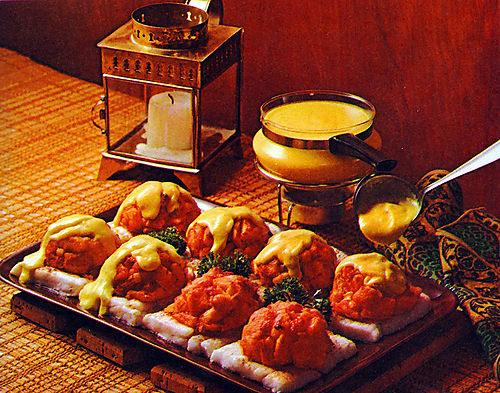 Yes, yes, tasteful presentation, not overdone or tacky, no egg slices or pimiento olives in sight. But those are grapes. In fish. God only knows what's in the sauce. I don't even know what this is called. I've lost track of which book this came from, and that may be a good thing, because the fish is also wrapped around something and it could literally be anything. It might be sausages.

Actually, this is just Filets De Sole Véronique, and the fish is rolled, but not stuffed. I was sort of disappointed to learn this; I hoped it would become a special entry in the "meat stuffed with more meat" category I'm about to do, and maybe have tuna or something inside it. From Woman's Day Famous French Cookery, 1969.

Still, those are grapes, broiled with fish. Funny French people.

Hot dogs baked in corn tortillas, why not? And there's the parsley and stuffed olives so necessary for the completion of a meal.

I don't really understand the woven horsey standing in attendance, though. It is a horse, and not a reindeer, because I'm pretty sure that lumpy bit at the back is a rider, maybe a cowboy. He's falling off the back of the horse in his excitement over "Wieners Enchiladas." And pimiento olives.

The funniest thing about this dish is its name: Fish Sticks Polynesian. And the subheading: A good use for leftover rice. Well, sure. Why not? First, you're mixing things such as pineapple tidbits, soy sauce, and a bouillon cube into the rice, which then gets baked under the fish sticks, arranged "spoke-fashion." This can't go wrong. Pop some carrot curls on top and voila, mealtime just got a whole lot more exciting. 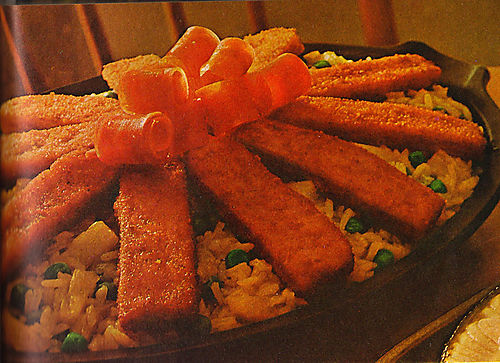 Today's entries are mostly from the Better Homes and Gardens Blender Cookbook. When you think of blending food, you think of pureeing it, mostly. But these are pre-food processor recipes, so it's not really so bad as it sounds. They wanted you to think of the blender as a convenient chopping tool, is all. This recipe doesn't even sound bad, and it appears to be garnished with things you could eat, but it looks so much like a moist tree stump with lichens formed on it, I'm surprised that the garnish isn't mushrooms and some sort of edible moss. 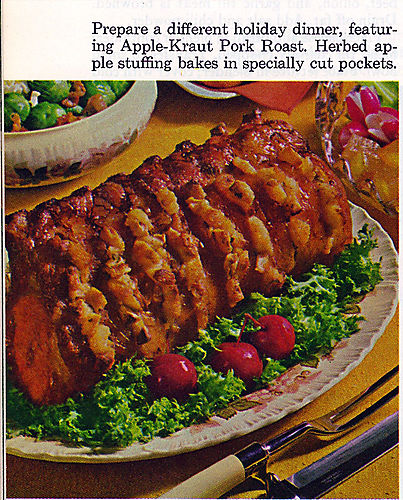 It's actually a bone-in pork roast, stuffed with a mixture of chopped celery and onions cooked in butter, and chopped apples and sauerkraut. I probably could eat that. 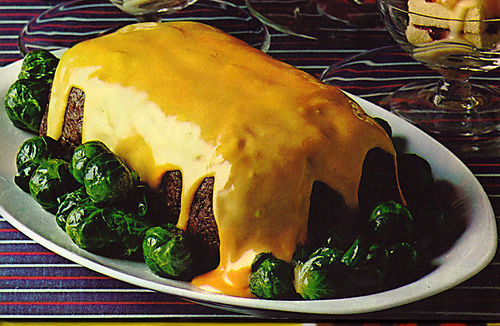 I just find this horrifying, in every way. The "meat" looks carbonized, the "cheese" looks like cake icing, which, no, and the brussel sprouts are waaay too green. I don't like them anyway. They taste like little balls of cow cud, if you can, like me, imagine what cow cud tastes like. I am not a fan of food that comes in balls, anyway. Something about biting into them bothers me.

(Since I wrote this, I have come to appreciate sauteed or roasted Brussels sprouts. I'm fairly certain I'd still hate these ones, though.)

By the way. The caption says to serve this to produce a "British" flair for your meal. And there is a recipe for trifle, to have for dessert. You can see a bit of it in the photo. It's trifle in theory, anyway. I am surprised there is no little toothpick paper Union Jack stuck into the top of the cheese casket. But you could take that extra step yourself, now that I've given you the idea. 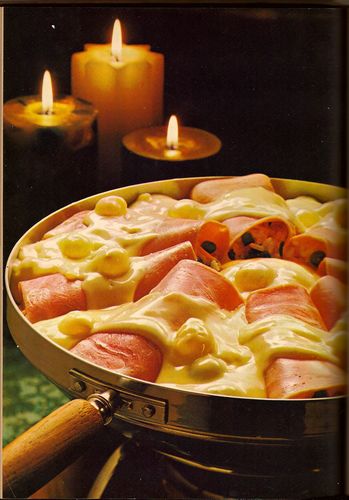 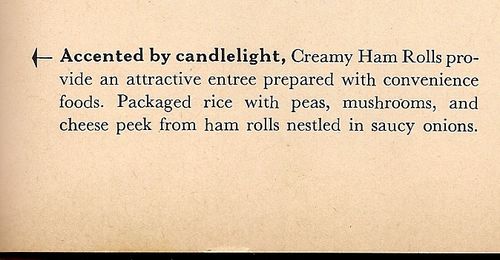 If not accented by candlelight, the cheese doesn't bother to peek out, and the onions just don't feel very saucy.

Ham+balls=me giggling while pushing away my plate

I just don't like balls of food. I also don't like wadded-up tissue, or when people take their straw wrapper and furiously roll it into a tight little icky thing that becomes slightly moist in the palm of their hand.

I'm aware of my issues.

This just cracks me up, though. I hate that there's no picture! 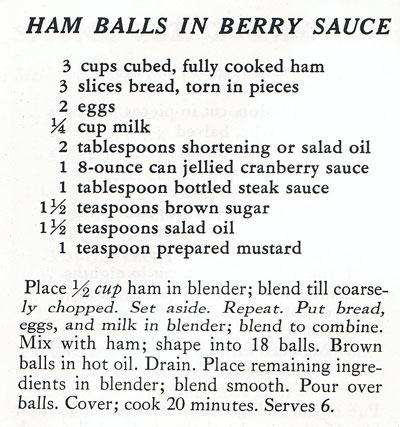 I don't want to put ham in a blender. 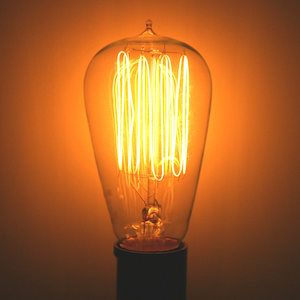