From the Heartland to the Mid-Atlantic: Land That I Love

I live on a different planet than the one I grew up on, though I'm only 1,150 miles from where I was born; a mere 18 hours by car. 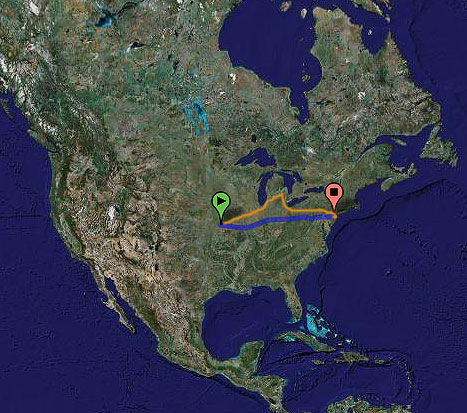 Home
There was a 6 year detour north to a neighboring planet, where I experienced the inexpressible beauty of the eastern Lake Michigan shore, only 4 miles from the place we called home, and the incredible wild and ancient expanse of Lake Superior. I'm not kidding when I tell you there is nothing like it anywhere else on earth.

(But that's really the awesome thing about Earth, isn't it? So many places you go are utterly unlike anywhere else. Most of the world, nearly every square mile of it, is not covered over by strip malls and parking lots. Our views, our perceptions, are much too narrow to take seriously when you really stop to think about it.)

New Jersey, though, is sort of like another star system than the one in which we find Missouri and Michigan. The people here really are different enough to be part of a separate culture than what you'll experience in the midwest. This can be a problem when it comes to political, religious, and social issues.

I live on nearly the same latitude line as my birth place, each location having four distinct annual seasons, and the same general understanding about nature and yearly changes that go along with that aspect of life experience. But culturally, longitudinally, we are worlds apart. Of course we have the same cable TV stations and broadcast networks and we have the internet, all drawing us closer in what we know and think about the world. Yet we're not at all the same because our worlds were settled by very different groups of immigrant ancestors, and because this world here on the east coast is always in a state of change while that world in the center of the country settled down a long time ago, and evolves more gradually, almost imperceptibly by comparison.

Now I'm going to contradict what I just said, a little bit, but it's not a contradiction if you've spent time here and there.

They weren't kidding around when they said "Everything's up to date in Kansas City." There's nothing really old there, so there isn't quite the same appreciation for antiquities, even in just American Colonial terms, that there is here. There's a constant turnover out in the middle of America, because while the people don't change much, the goods and services do, and if you blink you might miss something. There are what you'd call "institutions" there; types of cuisine, a few significant landmarks, and some beautiful parks. But people spend a lot of time all seeking out the same next new thing.

Here, many of the buildings were all old before the midwest was completely settled, but most of the people are less settled in their ideas and understanding about the world around them. They're more open to differences in other people because there are so many more people, so many more different people, and so much more to experience in terms of culture and diversity. It can't be matched anywhere else in the country.

Charlotte and her girls

For Alex I offer this awkward assessment of a couple of fine books. I wrote it two years ago, and it's kind of a mess, but I figure it made the point I intended.

I'm not what people call an educated person. Lack of focus, money, and guidance caused me to flounder early on, and I often feel I've never really grasped my true purpose. Learning, however, is my life's love, so I wander along, taking in as much of this or that as time and resources allow.

Self-educated then, but fickle, I often find out too late that I've taken the hard or long route, because of ignorance as to the map's location or key. I learn quite a lot this way, but there are gaps in every journey that may never be filled in.

Now I find myself undertaking the task of reviewing the past 20 or 25 year's accumulated storehouse of literature, history, philosophy, and science, attempting to collate it all into a package of some sort, or at least determining where it might lead me next.

I struggled over three evenings with Villette, not least because late at night, all books reformat themselves with 8 pt type to my 40 year-old eyes. Also not least because to my fickle, dilettente brain, second year French looked like third year, in at least a quarter of the passages.

On the fourth day, tiring of the deed and wanting to complete it as quickly as possible, I spent a full 90 minutes on it this afternoon, not resting until I reached the typically chopped-off unromantic ending of an unrequited 19th century author.

I still disliked the first volume very much. However, the second and third seemed much improved over my last reading of the book, and ultimately, I was satisfied in what I was able to glean about Lucy's character which had escaped me 18+ years ago, and because I have a more complete understanding of the arguments between Catholic and Protestant France at that time, M. Paul's fits and starts were made clearer as well.

As it turns out, complete translations of the French preceded the afterword, which was all about how the Brontes all died of consumption, but it probably did my brain some service to subvocalize and contextualize the foreign passages without external aid.

A few hours later, I can honestly say I miss the good monsieur and Lucy, and while the text of their story wore me down, I'll count them both among friends in literature from now on.

The author of the afterword, in an attempt to measure Lucy Snowe's merit, referred to the typical problems the reader encounters with Jane Eyre, Charlotte Bronte's other heroine; mainly that her character appears faultless, and that the first person narration sets up the rejection of St. John Rivers before Jane herself realizes it. I never, ever saw her as faultless. To my 20th century child's eyes, the idea of running away from Mr. Rochester in the first place set her out not as possessing a strong moral character, but rather a self-centered, mean sort of understanding of right and wrong; willfully unforgiving and narrow. In this respect, she really wasn't good enough for the missionary Rivers. So the idea that Jane was unlikeable because she was unblameable wasn't the problem for me. I had to dislike her just a very little because I found very specific things to blame. Maybe it's semantics, but I like my version better!

The argument would follow that this all takes place because of her sheltered upbringing, but the point is the same. I always wish the best and most for her, with every reading, but never do I see her as a blameless heroine. She's only able to realize love by dramatically comparing two sets of it, and that's not a bad way to go. But I feel like she was wasting a chance to live by avoiding the complexities of romantic love until it was nearly too late.

In that light, Lucy Snowe of Villette is definitely her superior, with a nearly opposite temperament that somehow leads her on to examine her feelings and find ways to externalize them in spite of her distaste for the largeness of life outside her self-appointed role.

Overall, there's one point about Charlotte Bronte that I understand better than before; she was like me, with a few simple but very large things to say. Afraid to say them, she nearly endlessly beat around the bush until finally there was nothing left but the truth, rendered anti-climactic from sheer exhaustion in the effort to speak emotion without betraying any.

Or do I mean betray emotion without speaking any? I'm too exhausted to work that out just now.