Kzinti did a good list in his blog yesterday. Play along if you wish. I didn't tag 8 people because that gets very complicated. But you can.

Here's a series of threes, roughly... 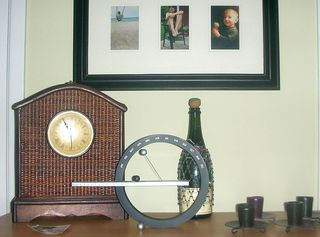 8things
a) I have a corked, half-empty bottle of Moet & Chandon Brut Imperial Champagne that was purchased in 1990, sitting right over there across the bedroom.
It has made nine moves with us, from Missouri to Kansas to Michigan to New Jersey. We never finished it back then because it was such a new taste for us; even though it had been waiting in the bottle for a suitable time, he'd never had an alcohol at all before, and I was only used to hearty red dinner wines. If we had a bottle now, we'd have no trouble handling it. Or more likely, we would spend money inappropriately and spring for the Dom Perignon instead.
b) Today is my very first boyfriend's birthday. That makes him 42, which, as you know, is the answer. I believe he lives in Arizona, and I suspect he is remarried after many years of slutting around after a disastrous first marriage, but I really don't know that for sure (wait, I mean the remarried part; I know the slutty part is true.) Anyway. I am quite the little memory represser, it seems, because only recently have I remembered that even though we never actually had sex, we had pretty much everything else most teenagers would know to have. My only guess as to why I'd forgotten is that, back then, I was so afraid of a) my mother, and b) God, if I actually went through with it, I felt too guilty about the things we did together to cherish the memories properly.
Youth is wasted on the wrong people.
c) Top three book characters I'd have intimate relations with: Harry Dresden, Archie Goodwin, and Atticus Finch.
d) Over the past eleven years, I have had "too much to drink" three times. Two of them were in the late 90s, and the third was last week. The first time, I drank a lot of rum, just to see what would happen, while chatting on AOL with a young man I used to talk with frequently. He was several years younger than me, but somehow we hit it off and chatted every day for a long time, and then I cut him off, for whatever reason. I've been known to do that. All that happened with the rum was that I typed faster and better, and wanted to talk about sex. But I digress, sort of. The second time was a few months later during a rough period of marriage. I nearly gave up on it then, but something wouldn't let me. Something never will let me, but that's all I have to say about that. Anyway, here is an audio file of a little piece I wrote after that second experience. If you are not an adult, please do not listen to it.

Nostalgia
merbelle
e) I'm having trouble sticking with this theme and yet maintaining a certain level of modesty.
f) a triptych:
mood indigo, 1997
muted music floating up from the room below
dancing, swaying, tipsy together across this creaky floor,
and you, whispering tasty lies, nibbling my ear,
tellling me all those things every wide-eyed girl
in her best blue dress yearns to hear
marble, 2003
pestle grinding, releasing scent
rubbing spice between my fingers
sweetening the stagnant air
summer, risen to full height
in the palm of my hand
gutteral purity...2005
no sharp clenching teeth,
no thick wet tongue wrapped inside of alcohol-burred lips
gulping your warm sweet breath I am drunk only on air,
a nearly tangible reverberation we exchange without thought,
speech, or manner...
g) I have worn three main scents since turning 21. First, my brother bought me a bottle of Gucci #3 perfume for my 21st birthday, and I loved it so. I managed to buy another bottle after that, but it was just way too expensive. Then I wore Avon's Odyssey for a few years after that; it was cool and inexpensive, and I'd enjoyed it as a teenager. About ten years ago I wanted a new scent before I had my final baby, and settled on Opium. Then for a few years, I felt it was a luxury I couldn't allow myself to have, but recently I changed my mind and now I wear it every day. In the lean times, though, I made my own scent with essential oils.

she catches my words in her throat

holding them hostage, laughing with pleasure

flung forward across her perfect,

perfect shoulders all angles and curves

she draws me into cardamom warmth

inhaling deeply, i gulp as

she swallows my breath

At the beginning of the year I weighed 141, with 40 inch hips and 30 inch waist. I have lost close to ten pounds, and 1.5 inches off both waist and hips. I'd like to lose another inch off each and about 6 more pounds.

These are silly pictures; no one looks quite right in cycling shorts. But the first two are from 8 weeks ago and the second pair is from just now. In another 8 weeks or so, I'm going to take one more set. 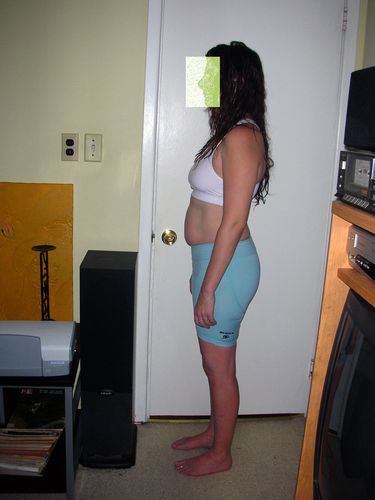 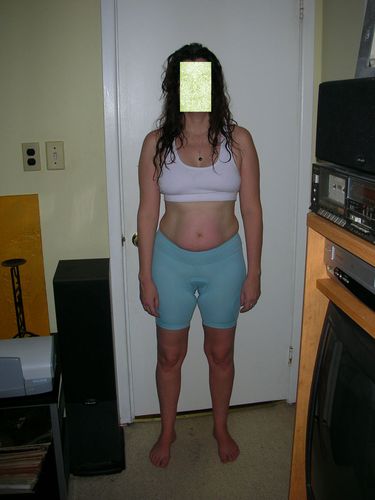 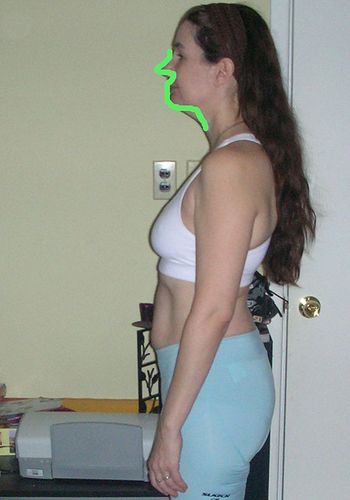 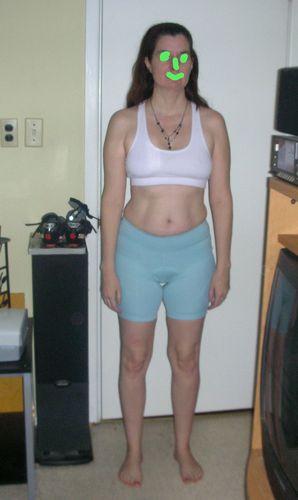 8weekupdate2
Hard to tell much change with this one, but there was an "overhang" which is gone. :-)

what I wrote two months ago for the fitness challenge

So I have this simple meal setup that I got, I think, from the federal government. It tells you how big serving sizes are in each food group, how many to have each day, and when to eat them. It's for a moderately reduced calorie day.

I never eat that much food. I wonder how people do. But it seems so well-planned, I'll post it if anyone is interested. I eat unbalanced food, is the problem. Rarely eat fast food, almost never drink soda. Low caffeine, low-to-moderate alcohol, never use mayo, don't put cheese on sandwiches, eat whole-wheat bread but not much, eat very little pasta or rice, not much meat. Avoid corn syrup assiduously. And yet, my day is unbalanced. I eat too much sugar and not enough vegetables, though I like them well enough.

I have a belly that sticks out. I never had that before. In the past, if I gained some winter weight or lazy weight, it was just sort of all over. Now I have that, but also a belly. It's daunting.

Four weeks ago, I weighed my most ever at a non-obstetric doctor visit; 141 pounds. Totally freaked me out. Before this past year, I'd never thought I'd ever weigh over 130 again. I gained over 10 pounds in one year. And I'd gained 5 the year before. See, I spent the year before I turned 40 getting to my perfect weight. Then a few things happened, and not only did I lose the ground I gained, I lost some of the ground next door as well. Lost 9 pounds, gained back roughly 17.

I've been told time and time again it takes 21 days to form a habit. I'm here to tell you it only takes one day, the 22nd one, to break it. I'm a master at that. I am habit-averse, except for a few odd proclivities, and, of course, the basics of hygiene. I could go into the probably why, but that's for another day.

I had free bowling the whole time I was losing that weight. I could bowl as much as I wanted any day of the week for free. I am a fierce bowler, and I'm certain that was a big help. I don't have that privilege now, and bowling is expensive. I have my bike on a trainer, a little Pilates book, and some 5 lb weights. I can't walk outside unless it's at least near 50 degrees and dry, but I do that whenever I can. The rest, that indoor exercise, is much harder. I belong in warm sunshine. Winter hurts me and indoors drags me down.

So right now I weigh 136 pounds. Why'd I lose 5 in 4 weeks? Well, two simple things. One is that I took muscle relaxers just until I was able to move around again, then started moving around again, and two is that, being aware of how bad things had gotten, I did manage to reduce some of the laziest eating I'd been doing. As you may well know, it's a cinch to lose 5 pounds. All the pounds after that are the hard ones.

At the end of 12 weeks, I'd like to weigh 127. And I'd like to weigh 124 to feel my very best. When I reach the 12 week goal, all my clothes should fit again, unless the tummy issue is from some entirely other situation. I don't really think it is. But at my age, getting stronger is the biggest issue, so it's not going to be a matter, as in the past, of just cutting out the stupid foods and only eating the ones that count. Exercise will be a bigger key from now on.

Okay so then life pretty much went to hell. But I'm on a bigger plan than just getting more fit and having clothes fit, so I can't let depression, anxiety, sadness, confusion, any of that stupid stuff get in the way of what I need to do.

I'm working on getting back to me; the real me that had been subjugated over the past decade due to a number of outside factors. I nearly lost myself. Now I may have lost a great deal else, but the self part, well, it's up to me to retain it, improve it, be the best me there is to be, which is pretty fricking fantastic, to tell the truth. I'd nearly forgotten.

A bit more on this in a bit.

Thanks, foxsydee, for being understanding about my part in the fitness challenge. I intend to be as fully here as I can be over the next four weeks.

I weighed myself this morning even though it's day one. I was happy to see the scale read 131, so I am not retaining water. However, I don't think it would serve me well to do any measuring for a few days.
I was not able to take up this challenge in the way I'd originally intended because of some changes in circumstances. Just attempting to survive emotionally meant putting a great deal of the rest of it on hold, although I have been watching calories and staying more active, and have started to learn Pilates exercises.
I would only need to lose 5 pounds more to get my BMI back to where I like it to be, though at this point I do hope to lose about 7 pounds; since it all fluctuates so much through the month, I'd like to have a lower range to move around in. But the most important need I have is to strengthen my back and abdomen. Therefore, I'm resetting my own fitness challenge to last nine more weeks starting today and carrying on through the month of May. I hope, at the end of that time, to feel like a much more fit and whole version of myself, at least physically if not otherwise.