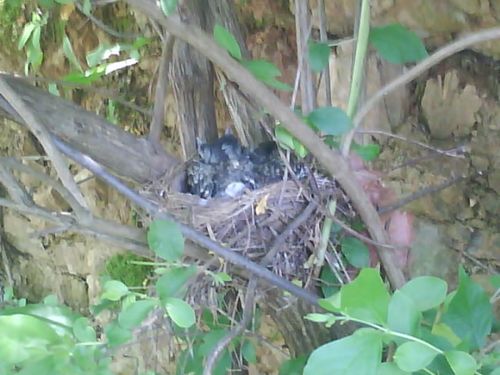 On a breezy evening.

On a breezy evening. 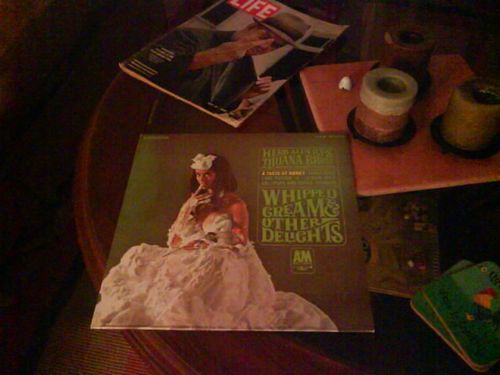 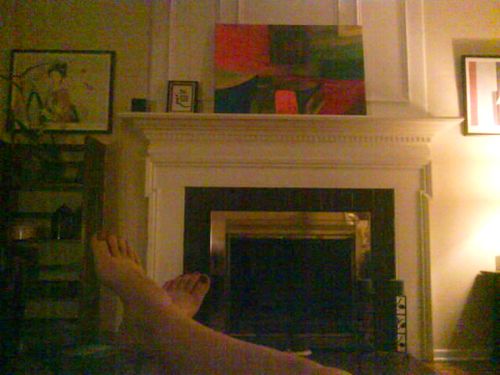 Why do you think teenagers are involved in more car crashes than any other age group?
Sponsored by Allstate.

Have you met teenagers?

This is a little garden bed the homeowners built for what reason I can't say. There are little beds all over, which is neat, but putting this behind a fence makes it really hard to work with. I tried to condition the soil last year and put in some tomatoes and basil, because it does get "enough" sun, however, they largely failed. 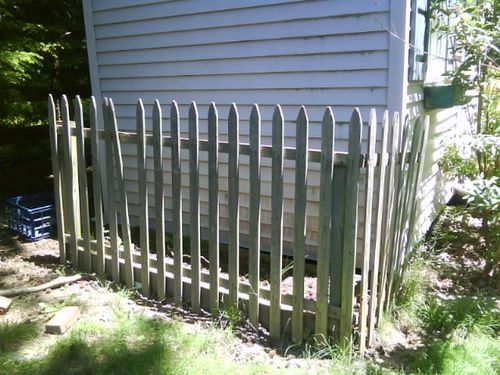 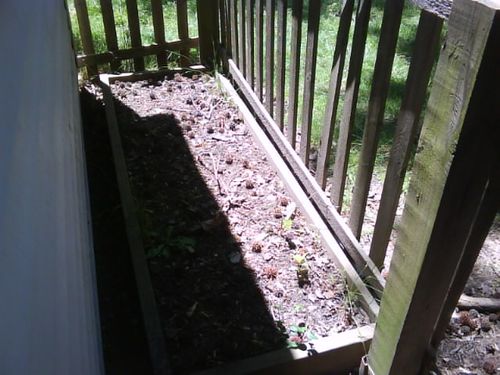 DSC00245
I can't really remove the fence without causing some wreckage. The bed is about 5.5 x 2ft, and gets, oh, 4 hours of direct sun, and about the same amount indirect. But all through that fence. It sort of faces west-southwest. We're in a little mild pocket of west-central New Jersey which is zone 7a, and quite rainy through July and August, except occasionally when it isn't.

I could do more herbs, but unless I could find something really interesting around here, I'd rather do something different. It's hard to find the old-fashioned or unusual ones I read about, and was able to grow when we lived near the shore.

I certainly have far more sage, oregano, thyme, and spearmint than I'll be able to use. There's lemon balm, lavender, rosemary, onions, sweet peppers, and a couple of green things I'm hoping the rabbits under the shed won't eat. And some pansies and violas, nasturtiums, and a few miscellaneous clearance plants I've collected.

The final point, of course, is that I don't actually have money, per se. It's always a sort of theoretical prospect, but I manage to pull it together here and there, now and then.

Okay, and the final, final point is, how annoying to have that narrow space for access to the bed. Who thinks of this?

If anyone from Twitter reads this, who doesn't have a Vox account, you could just tweet me with a suggestion or a link. I will be very, very appreciative.

This weekend I painted the TV wall a darker color than the rest of the room. You can't tell in the photo, because I did not try hard to take good photos, and these three are rather grainy. Perhaps when I have the whole room done I will. Certainly I will! 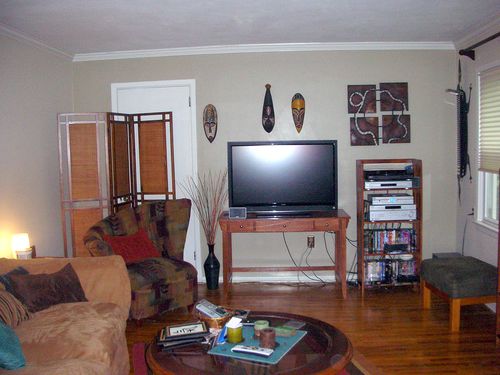 Noreally
I also repainted the hearth and brick around the fireplace. It's deeper and warmer than before, but not much different, as the owners' aesthetics must somewhat come into play. The paint color is called "black bordeaux," and that is exactly what it is, seen live, and not in a bad photo. Clearly, the mantel is a bit of chaos. I'll attend to that shortly. 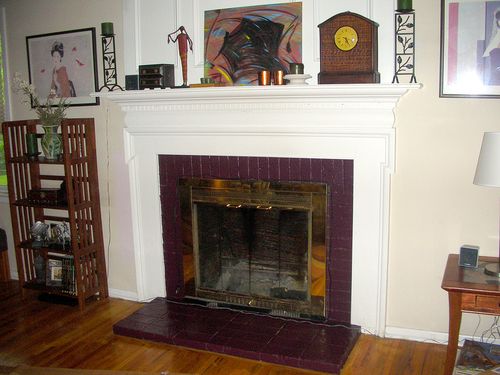 Blackbordeaux
Then I'm repainting this long wall, which color is better illustrated above, and putting up a color block to frame one or two of my paintings—likely I'll do new ones this summer for it (I like to paint. Some of it is here. But my best is yet to come.) There are two new pillows on this couch as I try to come up with the perfect combination. They are more than just decor; the back of this old couch has almost no padding, and is uncomfortable without them. The pillow on the black chair doesn't belong there; it's one for which I'm making a new cover, as the old one was fussy and scratchy. 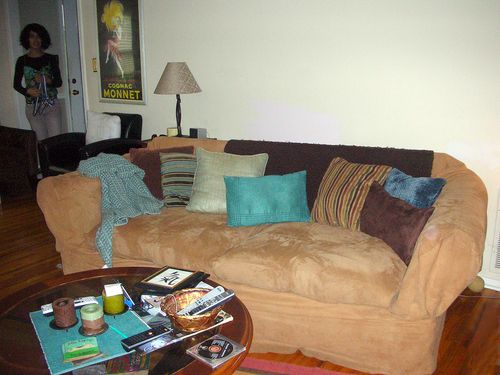 Blankwall
In this flat photo, you can't see how the couch is angled out slightly in front of that end table; it looks more balanced in the "before" photos I took nine days ago, which are here.

walking through the park and reminiscing 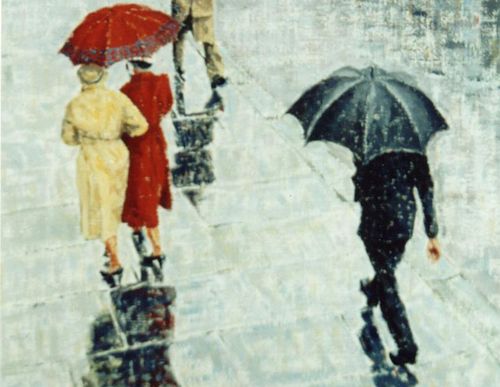 Vox Hunt: Excerpt from One of My Favorites

Share a sentence from one of your favorite books.

I found I could not share only a sentence. There are just too many from which to choose. Instead, I offer passages I have reread many more times than I can count.

I like letters in books. Here are examples of two.

This first is an excerpt of a letter from a man to a woman, fellow poets, whose correspondence resulted in a brief physical relationship.

What a walk, in what a wind, never-to-be-forgotten. The clashing together of our umbrella-spines as we leaned to speak, and their hopeless tangling; the rush of air carrying our words away; the torn green leaves flying past, and on the brow of the hill the deer running and running against that labouring mounting mass of leaden cloud. Why do I tell you this, who saw it with me? To share the words too, as we shared the blast and the sudden silence when the wind briefly dropped. It was very much your world we walked in, your watery empire, with the meadows all drowned as the city of Is, and the trees all grown down from their roots as well as up—and the clouds swirling indifferently in both aerial and aquatic foliage...

Next week we shall walk again, shall we not, now it is very clear to you that I am no ogre, but only a mild and somewhat apprehensive gentleman?

And did you find—as I did—how curious, as well as very natural, it was that we should be so shy with each other, when in a papery way we knew each other so much better? I feel I have always known you, and yet I search for polite phrases and conventional enquiries—you are more mysterious in your presence (as I suppse most of us may be) than you seem to be in ink and scribbled symbols. (Perhaps we all are so. I cannot tell.)

...Let me know, if you are able, that you have received this first waiting-letter. Let me know how you are, and that we may meet again soon.

From Possession, by A. S. Byatt

This one is a letter from a man to the woman he could not have when they were both too young to overcome obstacles of the day regarding fortune and name. But they never forgot each other, and when they met years later, understood what they truly meant to each other.

I can listen no longer in silence. I must speak to you by such means as are within my reach. You pierce my soul. I am half agony, half hope. Tell me not that I am too late, that such precious feelings are gone for ever. I offer myself to you again with a heart even more your own than when you almost broke it, eight years and a half ago. Dare not say that man forgets sooner than woman, that his love has an earlier death. I have loved none but you. Unjust I may have been, weak and resentful I have been, but never inconstant. You alone have brought me to Bath. For you alone I think and plan. Have you not seen this? Can you fail to have understood my wishes? I had not waited even these ten days, could I have read your feelings, as I think you must have penetrated mine. I can hardly write. I am every instant hearing something which overpowers me. You sink your voice, but I can distinguish the tones of that voice when they would be lost on others. Too good, too excellent creature! You do us justice, indeed. You do believe there is true attachment and constancy among men. Believe it to be most fervent, most undeviating, in—

From Persuasion, by Jane Austen

Here are some songs to play while thinking pleasurable thoughts about men. 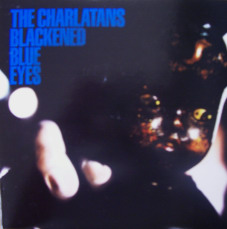 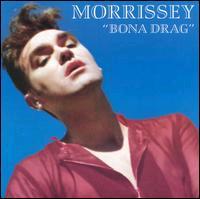 The Last of the Famous International Playboys
Morrissey 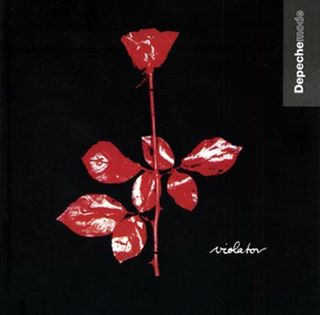 World In My Eyes
Depeche Mode 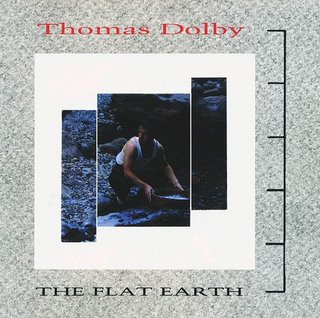 I Scare Myself
Thomas Dolby 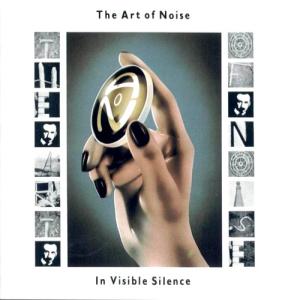 Peter Gunn [the twang mix]
Art of Noise
Here's a man to think about while playing them. I'm in one of those moods. I got it from Alex, but enlarged and fussed with it a bit. the thing about men, and loving them

After I stated my oft-stated phrase yesterday, "I love men," someone asked me if I idealize men. This confused me, as I was saying I love men promptly after making fun of them. If men were nothing but an ideal, what would be so loveable about them?

In terms of idealization, I'm super picky. Probably, if the need and opportunity came up in my life to find a new man or men to physically love, I'd be even more picky. I mean, I get to be, right? I have no problem saying that. But this isn't actually about that. When I say a whole bunch of things about a whole bunch of things and then someone seizes upon one little innocuous thought like "I love men" and stretches it into Something to Discuss, I get kind of bored and frustrated. I say I love men quite regularly, every 4 weeks or so. Why ask why?

But now I will discuss. Briefly, with myself.

Suppose that statement was only based on, oh, Bret Maverick, Captain Picard, Dr. House, and Batman. That wouldn't be very connected to reality in one sense, but in another, it certainly would. Men wrote those characters and men portray/portrayed them. So I'm loving them for wanting to be those characters, even the pained and painful House.

Women write those characters too, and why do you think that is? They aren't making them up out of nothing. They're making them up out of bits and pieces of real life, the best and the worst of it. They're taking what they see and combining it with what they want to see, what they want to believe is possible, and throwing in a few deep flaws just to make things interesting. We like interesting.

What do the characters I enjoy have in common? Many, though not all of them, have physical attributes in common, a tendency toward the tall, dark and lean. They all have inner strength, some of them also have inner pain. They're smart, and tend to be witty. They make a woman feel both strong and weak at the same time. I will never apologize for appreciating that. It's how I was made.

On a parallel note, I really, really hope Dave Gahan is okay.

Out roaming the physical universe I inhabit, I don't see many Bret Mavericks or Captain Picards, at least on the outside. I see men with pants belted below their bellies, dumb shoes, and even dumber senses of humor. But I watch them try at life, and most of the time it cheers me instead of irritates me. At least around every 4 weeks it does. I love seeing the Effort of Being that men do. Sometimes it's cute, sometimes it's irritating, but I generally find it kind of irresistible. And when I occasionally see one all dressed up, especially in one of the new long and narrow suits, and he smells good, and smiles with his eyes, well, life's extra pleasurable to behold in that moment. Life is made up of a long series of moments, after all. They don't all have to be down-to-earth.

I love men both for exactly who they are with their odd habits and boyish hobbies and ridiculous senses of humor, and for all they could be and try to be; cowboy and spaceman and super hero and amazing lover, and all is okay in my world in this moment, right now, today.