It's so windy today, and very sunny. The first spring-warm day this week. It's overwhelmingly intoxicating out there, just to breathe in the breeze.

I rubbed peppermint between my fingers, then lavender. 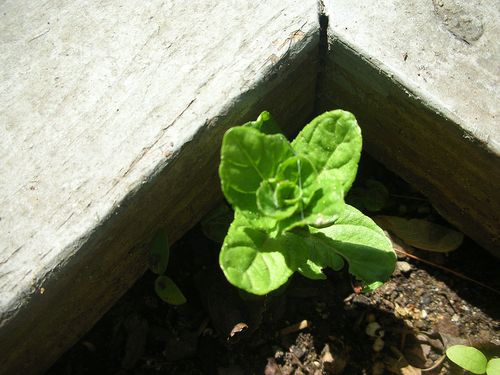 Peppermintmacro
(neat accidental trick with the macro setting; the top of the peppermint isn't sharp, but I like how the photo turned out.) 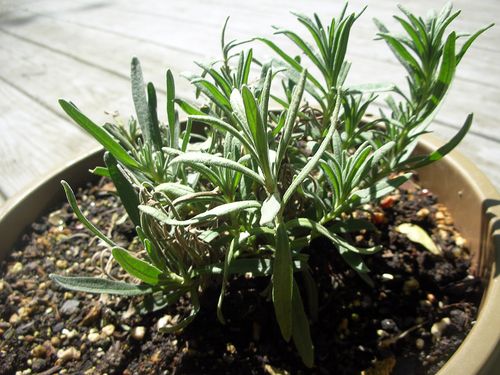 Lavenderpot
I buried my face in the lush little sage plant I've been carefully bringing along toward a deeper fullness than in years past. Next, the lemon thyme and rosemary; good food, the scent of my ancestors, clean, rich, vibrant. 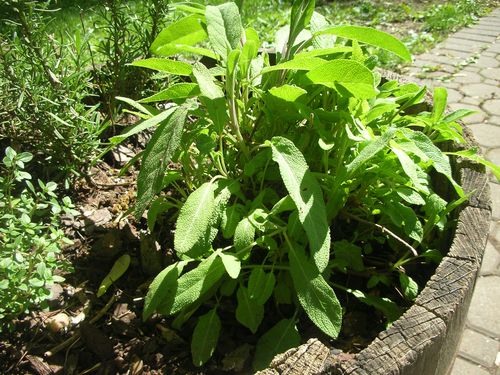 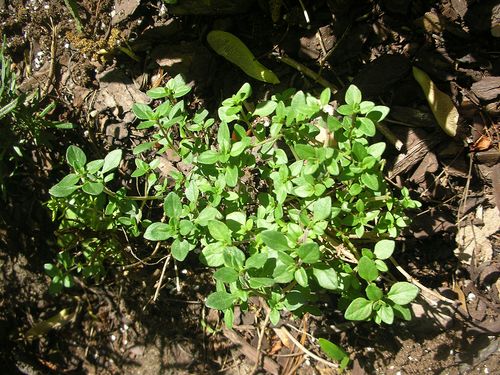 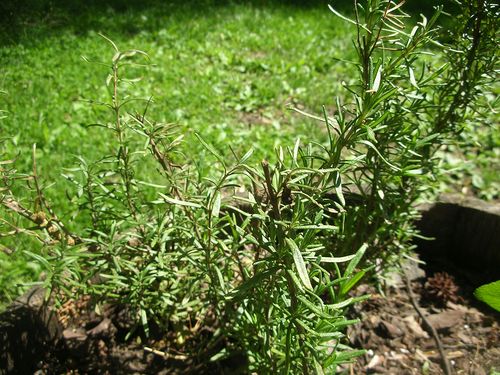 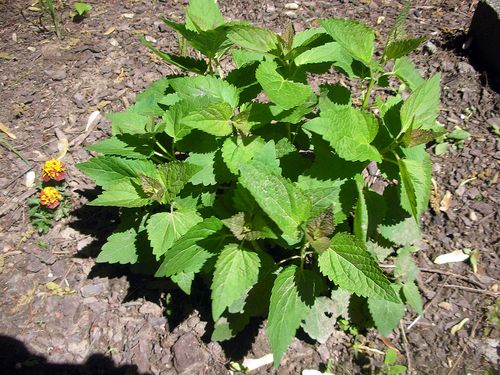 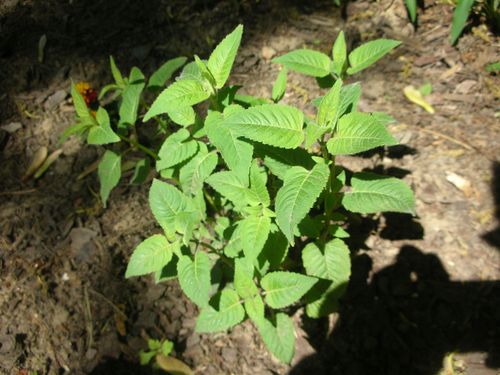 Beebalm
To me, an iris is a childhood memory. It smells like grape Kool-Aid, and long ago, after riding my bike past the Carpenters' huge patch of them, I always hoped Mom had thought to make Kool-Aid for me that day. I may not enjoy that drink any longer, but I still love the scent. 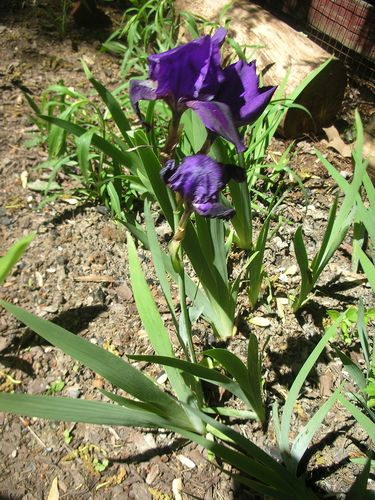 Windyiris
The spearmint always explodes to life just before Derby Day. This is one corner of a rapidly filling bed. There will be fresh mint juleps on Saturday afternoon during the Run for the Roses.

Spearmint
Looking it over, I realize these photos were all taken with nearly the exact same perspective. I'll try to be more interesting next time, but there's this back thing I deal with, makes me a bit lazy sometimes.

this will always bear repeating 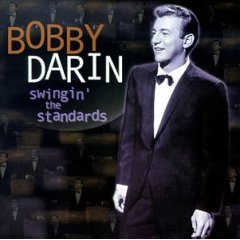 I'm Beginning to See the Light
Bobby Darin
Close your eyes and listen. No, I mean it. Close them.
In other news, there is very little news. I think about so many subjects I'd like to address, and muse over them during the endless drives to and from South Jersey homeschool baseball, then find myself too tired to actually key them in. I'm still reading the Christies, up to The Patriotic Murders, but don't know when I'll get back to posting in depth about them. Or anything else.
I will say, on that point, that I still dislike Death on the Nile, and that it took me days to get through Murder is Easy, with Miss Wayneflete and Wonky Poo. I think a screen adaptation of that one ruined it a bit for me. Well, I say that, but have just recorded the latest version of it starring the new Miss Marple, Julia McKenzie. It might be good, OR IT MIGHT BE WEIRD SINCE SHE'S NOT IN THE BOOK.
Today I read Sad Cypress, though, and still like that one very much. I've never seen a Poirot of it, but surely there must be one. I suppose Google knows. Anyway, I want to write about some of the issues that are presented differently before and after the War, so that'll be in just a few more books.
No news about the garden plots, but I'm going to pop over there before the Little League game tomorrow to see if they've started staking. We had two days of rain, so today was probably set aside for drying out.
Finally, a bit of randomness to conclude this post of nothingness, here is a fine picture of one of my old loves, Joseph Cotten. I love his long legs, crowded into the cab between two tough guys. 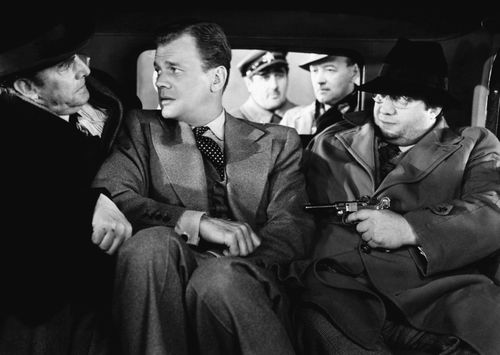 JourneyIntoFear
Oh! Actually finally. Don't you just love the Eleventh Doctor? But I'm not cool with American TV dismissing Ten as Something Inferior Which Came Before. Poseurs.

you're all witnesses now, okay? 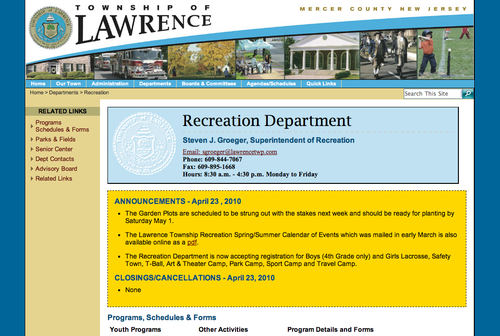 I planted a few things in these buckets in case they get their stuff together down at the township so we can use our community garden plot. There are four tomato plants; two Rutgers and two Early Girls, two Poblano peppers, and three artichokes. And some leeks, all in a mess until I see what I get to do with them. 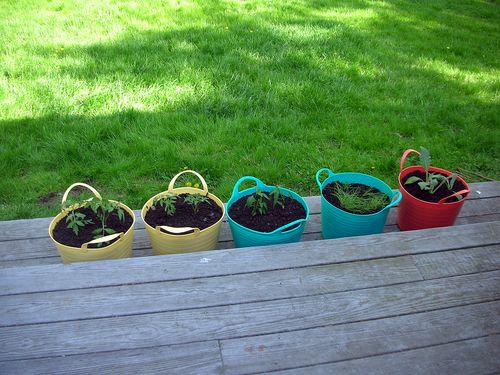 Communitygarden
If and when the community garden opens, what else gets planted will simply depend on how far along we are in the season. Late in the summer I'll put in some more greens like I have in my backyard garden, otherwise, I dunno. Maybe some bean plants that are already well-progressed or something—if it's just in the next couple of weeks, that will be easy to do.
Aaron has six red cabbage plants waiting, Livvy has a Roma tomato plant and two banana peppers. So we'll just see what happens, I guess.
There are several other new pictures posted in my library. :-) The Brussels sprouts, collard greens, and some of the herbs are taking off very well so far.

is not something you can decide is a good thing in advance. Maybe it'll turn out to be a good thing, but right now? Dunno.

I signed up for a community garden plot last month. They still haven't marked out the sections for this year. I think it has to do with major township budget cuts. There are 139 plots; some people have two, but you can reckon a good 100+ gardeners are anxious to get started, and are miffed there'll be no peas later this spring.
I'd planned to share the entire process with you here, from dirt to food. But so far there's nothing to share but a big brown patch where the farmer has turned up the ground with his tractor. Two trash cans in the front next to an area that will eventually become a mulch pile, and a water pump down over to the left near a seemingly-to-me random information stand, like the kind you see at the entrance to nature parks. You can picture all that for yourself.
Two more things to note: yesterday I went to Princeton Record Exchange for the first time in several months, as I had a few dollars in my pocket. It was Record Store Day, as it turns out, and the place was packed! So I didn't get to look through the stacks with as much pleasure as I have in the past; I'll have to go back sometime soon. I satisfied only one side of my brain with the following $1 purchases: 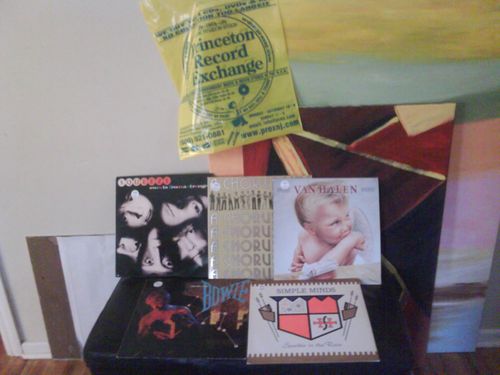 phone pic records
The Van Halen is for my oldest son, and A Chorus Line for one of my daughters.
Finally, I've been working on my other Vox blog, not the poetry one I can no longer access and that Vox won't answer any letters about, the other other one. I've put my cookbook posts there, and will add more, plus recipes and photos of things I actually make myself. It's slow-going (and I've lost 3 important pictures!) but giving me something to do while waiting for things to share here in a more personal sense. It's the two halves of brain thing, or a Gemini thing, or something like that.
One of my posts there was featured this week in the [culture is good] section, how neat is that? 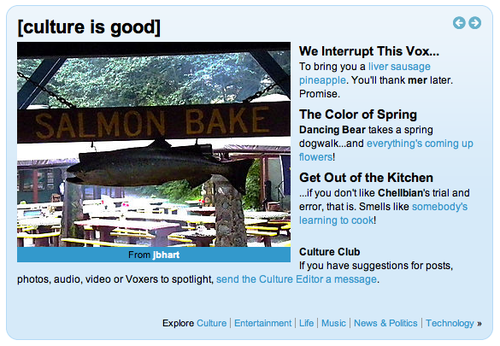 yes, but I still don't get why it's yellow?

It's all just getting started. 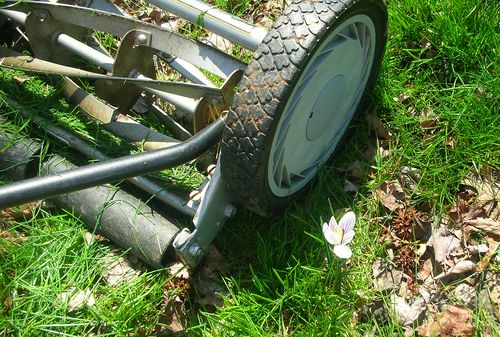 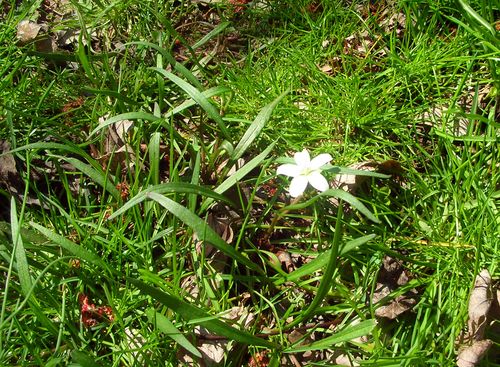 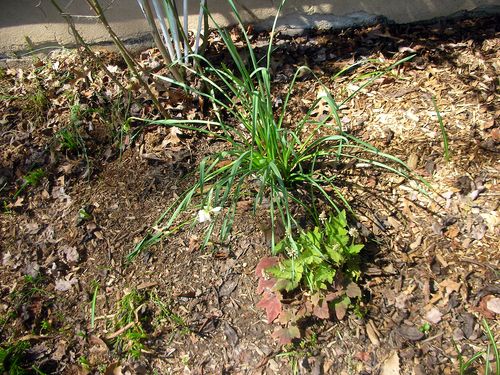 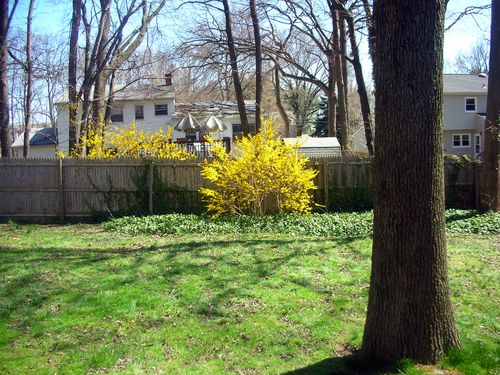 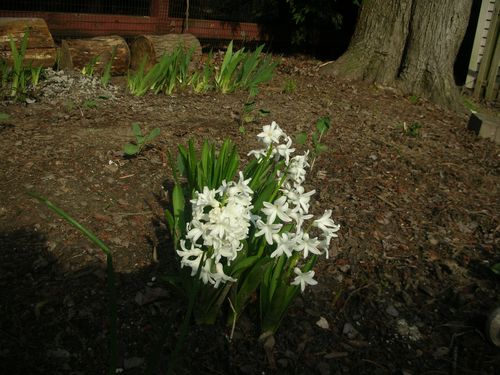 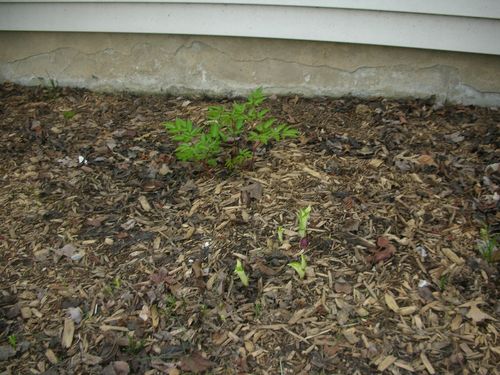 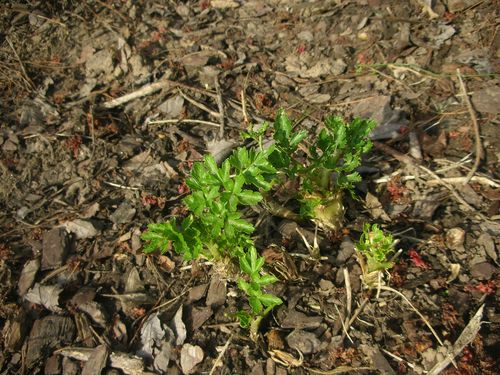