Overexposes everything. I could make adjustments, but that would require putting on glasses to see up close. 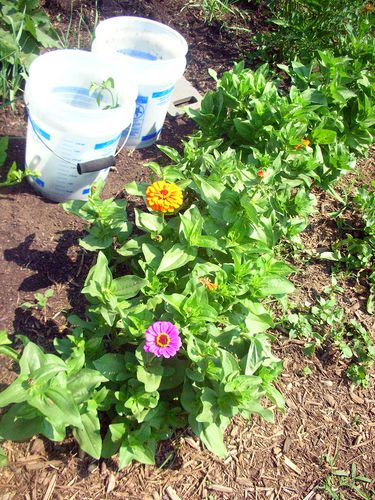 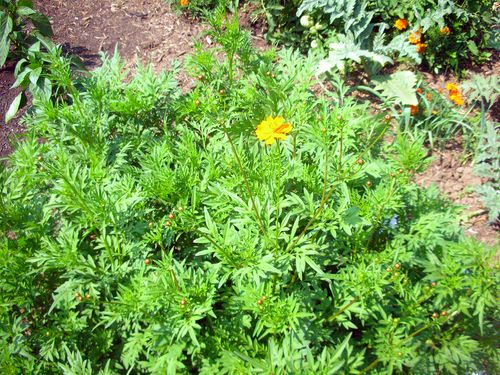 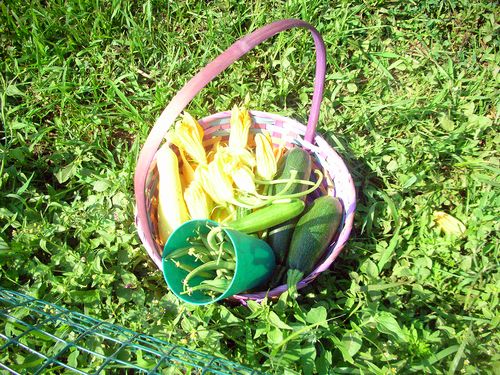 A brief and very silly conversation on Twitter brought this poem to mind. As it happens, I was thinking that the expression, "la petite mort" is less apt for me personally than something like "enivré de l'amour." A really good parallel example if you can be natural and sensible and not easily offended, is the look on a baby's face just after he's finished nursing at his mother's breast. I've seen that exact look on a grown man's face.

The translation is not my own; I'm thinking of working it over slightly, just for fun. But this is my favorite published one, from an old novel, name of which I do not recollect at the moment. It's not as literal as some translations, and therefore captures the original sentiment better.
(a. I'm still following along here, I promise and b. going to post some more silly lists later and this week.)

that is the only question.

If you would not feel the horrible burden of Time

weighing on your shoulders

and crushing you to the earth,

With wine, with poetry, or with virtue, as you will.

on the stairs of a palace,

or on the green side of a ditch,

or in the dreary solitude of your own room,

and the drunkenness be half or wholly slipped

ask of the wind,

or of the wave,

or of the star,

or of the bird,

or of the clock,

ask what hour it is;

"It is the hour to be drunken!

if you would not be martyred slaves of Time;

With wine, with poetry, or with

virtue, as you will."

Someone at Pujeebuh made a "random" list of 10 inexplicably attractive TV and movie villains. Like, 9 of them just creep me out. The other one is a character played by James Marsters, whom I mentioned in my very first blog post in 2003. I lurve him. He could play Barney and I'd still want to bring him home to play with. So for me, that list is 90% inexplicable, but not in the way they meant. And 10% not at all inexplicable in any sense of the word.

I made my own list. It's not random. It's not entirely "inexplicable," either. Some of these actors are quite handsome. But they make creepy wrong men sexy, and memorable, and it takes more than handsome to do that. Sometimes an evil character is written to be at least a little bit sexy; I think only about half of these were.
Okay, it would be easy to just name a bunch of attractive men who've played bad guys. And enjoyable. I tried to do a  different thing here. So I also kept it strictly to the movies. Sexy bad guys on TV are practically a cliché.
8. Mr. Blonde, Reservoir Dogs 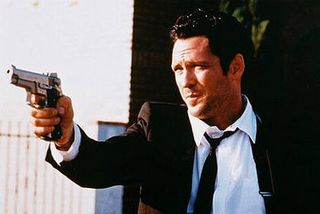 Mr. Blonde
The actor, Michael Madsen, was a nice-looking man 18 years ago. Mr. Blonde is twisted and violent and not someone you could converse with over dinner. He's sort of a blank slate. There's no reason to find him sexy, and in real life, of course, it would be just awful. But while watching this movie, I dig him.
7. Sheriff of Nottingham, Robin Hood: Prince of Thieves 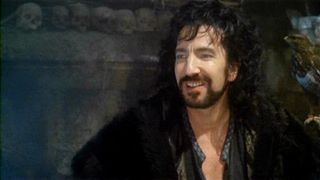 Sheriff
I'm not one of these women who moons over Alan Rickman. I think he's a fine actor, who always steps up to the plate. But I really don't see him the way others do, and to my mind, he's often miscast. At first the Sheriff is just annoying to me, as that character tends to be. But after awhile, I'm very into him, thinking, "Hey, why not?" Well, and then he gets all freaked out and whiny, but before that.
6. Norman Bates, Psycho

Norman Bates
Look, I always try not to find Norman Bates sexy, but I just can't help it. It's mostly the fault of the sultry ambiguity of Tony Perkins, so what are you gonna do? I think he was what Keanu Reeves wishes he could be.
5. Lex Luthor, Superman (1978) 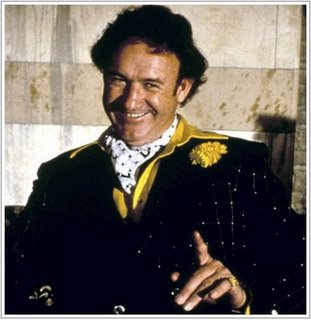 Mr. Luthor
I never try to not find Gene Hackman sexy. So, you shut up. But the thing that makes his Lex Luthor sexy is his crazy doomed confidence. He's like The Brain, and Ned Beatty's Otis is Pinky, okay? Only Hackman's Luthor wears his tacky suits really well, whereas The Brain is a cartoon mouse. You want them both to win, though, even though it would be bad if they did, and even though you can't quite take them seriously.
4. Captain Hook, Peter Pan (2003) 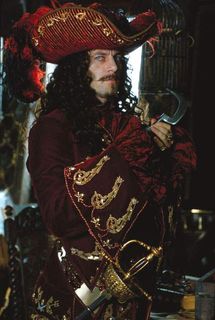 Cap'n Hook
Two people I know think that Jason Isaacs is, like, their dream man. And many women found him sexy as Lucius Malfoy. I'm just not there. But his Captain Hook is very groovy, if a bit overly—Georgian (yet Edwardian?) Pirate?—in grooming and attire. I dunno. It's a very sexy movie, altogether. He's a big part of the reason why.
3. Dr. Tolian Soran, Star Trek: Generations

Dr. Soran
He's one thing, yet he's completely another thing instead. He's all full of urgency that's pushed everything else aside. You couldn't enjoy having sex with this guy. Viewing him from a distance, though, he's very wantable. It's that whole man-in-pain thing.
2. Ramses II, Pharoah of Egypt, The Ten Commandments 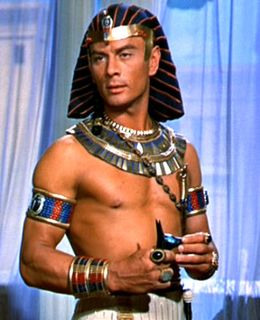 Ramses
Nobody didn't think Yul Brynner was sexy. After he shaved his head for The King and I, many men followed suit, often to the deep chagrin of their wives and girlfriends. I do find the idea of the Egyptian Pharoah being sexy a little weird, (though not the weirdest thing on this page,) but Charlton Heston's sexy Moses is actually weirder to me, all these viewings later. Maybe I find stubbornness sexy. I certainly relate to it. Anyway, I know Moses is the good guy, but I still always wish Ramses would come out well in the game.
1. Agent Smith, The Matrix

Agent Smith
Again, stubborn. But of course, made to be that way. I'm a fan of the resolute, and a really big fan of the suit and shades. Hugo Weaving plays a man with firm judgment very well, and looks good doing it.
9. Amon Goeth, Schindler's List
It's very, very wrong. That can't be overstated, because nobody made this guy up. The real Goeth (don't remember how to do the name properly,) was just a terrible, terrible person.  But the character, put into the oh-so capable hands of Ralph Fiennes, exudes an undeniable sexy quality.
10. James Spader
Yeah, that's a guy, not a role. And I've always found him rather turtle-like in appearance. But, man. Give him a dark or troubled or sadistic character to chew on, and he turns up in my dreams. I can't explain it. It's inexplicable.

I've commandeered the iMac for the day, so I'll be doing a lot of catching up on your blogs, most of which I have been reading but not commenting on, because my space bar has gone insane. And I'm posting a couple more things.

Today is the longest day of the year, and the first official day of summer. For me, this is happy and sad. It means the light is now waning for the next six months. Just when I get it where I want it, it starts back the other way. But such is the pendulum of life, eh?
I picked squash! I will cook them tonight with little tomatoes, basil (which I also picked today,) lemon juice, olive oil, and parmiggiano reggiano. 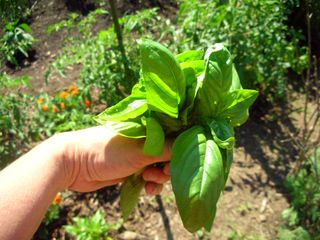 Genovese
How fantastic it will be when the tomatoes are also from my garden. However, I do have very good ones from Costco.
On Saturday we had a salad which included some of those tomatoes which I'd marinated with cinnamon basil from my backyard garden, and balsamic vinegar. I adore cinnamon basil. I also have Thai basil, which is great in sauce.
In just a few days, I will have green beans. This is pretty exciting because I haven't grown them since I was a child, and I wasn't sure how they'd turn out. It won't be a huge yield, but still nice. 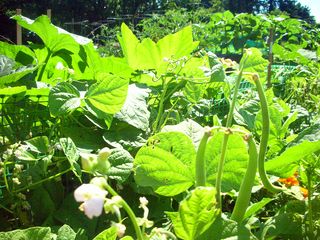 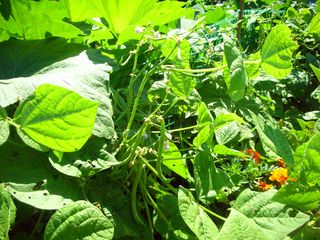 Nearlygrown
The flowers in the center of the garden are getting ready to take off, and then it really will be something to behold. I'm looking for an old chair I can set in the corner so I can go there on less hot days and just enjoy the view. 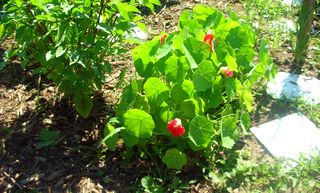 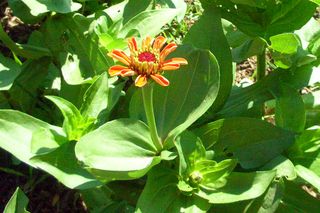 Nearlyzinnia
Besides these and the orange marigolds we planted with the vegetables, we have poppies at the front, and an assortment of bouquet flowers in the very very center and in a corner, but they still have a long way to go.
There are a few more new garden photos here.

What important life lesson did you learn from your father?

Everybody else drives too goddam fast.

It was great seeing you last year, though we didn't get to take you out one last time as we'd hoped. Everyone loved your stories and songs, and the time we shared. Livvy still can't hear that Bobby Darin song without tearing up. She turned 20 a couple days ago. We went to a wildlife refuge and she read all the tree descriptions in a hilarious Cockney accent, with color commentary. You'd have teared up laughing.

We wish we'd spent more time with you over the past few years, but we live so far away now; it was so hard to get back home. Now that you're gone there seems little reason to, I guess.

My brothers remember you with a less objective eye; they want to remember the fishing-and-basketball dad, not the one Mom had to drive home from the tavern all those nights. They remember her anger and sadness more than your drunkenness, but if truthful, they also remember that you weren't there a lot of the time when we needed you, and that neither of you prepared us very well for adulthood, too mired in your own concerns.

But they're not parents, as I am. I don't weigh the good stuff and the bad stuff; it was so long ago, and my life is my own to live. Being a parent is rewarding, but it's also incredibly hard.

So, as I now turn the corner fully into middle age, I just want to thank you again for jazz and big band, for shushing me during the good horn parts, for showing me the pleasure of mixing paint, the difference between cherry and maple, walks with dogs (you'd love our new Shepherd Lab Archie, so much like our Shepherd Collie Monty Python back in Greenwood,) potato soup, antique school books, and taking life slowly, because most of the time there just isn't any good reason to be in a rush.

Part of our last conversation is here, audio is only passable, but it's all I've got.