Being misperceived is an excruciatingly painful experience for me. When there’s no logic behind the misperception, I feel like life is just spinning wildly out of control. I can’t grasp the notion of wanting to believe bad things about people. I’d rather not even ever choose to. Life should be about uncovering beauty, not exposing pain.

My beautiful garden is not big enough to bandage such a wound. But if it were to rain again today, I’d go sit in it again. I will do that this evening, either way, while the big boy is at baseball. In the meantime, I’m working to hold my head together.

So let’s consider the artichoke. My mom bought them once a year or so. She would rinse them and shake them dry. Snip the sharp tips off the ends of each leaf, or just whack off the whole top. Mix together Italian-seasoned breadcrumbs, parmesan cheese, and oil, then stuff some of that down into each leaf. After all of them were filled, she sprinkled the rest of the mixture on top, and cooked them in her pressure cooker, which has to have water added, the top secured, the setting adjusted carefully. I liked watching the top rattle as the steam rose.

My mom’s family was Italian, but I rarely saw them use olive oil, just Mazola or Wesson, etc. Barely even actual butter as opposed to margarine. And I’m pretty sure the cheese she used wasn’t as good as the cheese I can buy at most grocery stores in New Jersey, though the cheese for the artichokes did come from an Italian specialty store. But those artichokes were special. You pull off the leaves one at a time, working your way from the outside into the center. The moist, blended stuffing is there to enjoy, and then a bit of marrow at the base of the leaf. You scrape your teeth against the leaf to get it all off, then discard the leaf in a bowl next to your plate. When you get to the center, there’s this fuzzy section that I never liked as a child, but do now. And the tender, sort of naturally marinated heart now exposed, to be relished with a spoon.

You see what a process that is. It’s absorbing. You have no choice but to fully engage in that experience, and you’d be a fool not to enjoy it. Artichokes are strange, some might say ugly vegetables. They're prickly and can cut your fingers. They hardly look edible. Only parts of them are edible, in fact. But those parts are a treat, really a treasure. It’s worth overcoming the initial misperception.

My mom never grew artichokes, probably never even saw a plant. But I have. I’ve grown some myself, and several are waiting right now for me to pick them. It feels amazing. I follow an artichoke grower on Twitter, they post lots of links to interesting artichoke recipes. I’m going to make them like mom did first, though. She knew no other method. I’ll steam them in a glass pan in the oven, because I don’t have a pressure cooker. I have access to higher-quality ingredients than she did, and my artichokes will be freshly harvested from my own garden. 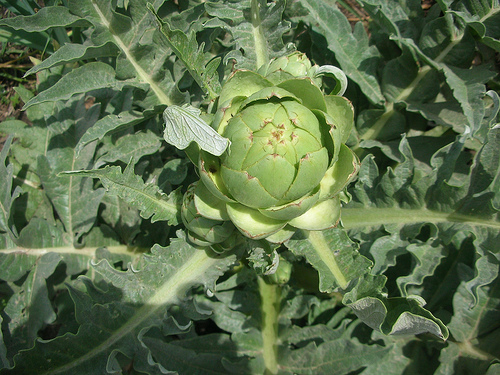 No way they’ll taste better than hers, though, at least not the first time. But that’s cool. I’ll be painting a memory. And I want to savor the reward  from a time-consuming and prickly effort.

Thoughts a bit shoved off track, we’ll consider the circles, moon, and music next time.

the moon in my hand, part one

You see chaos, I see glory. 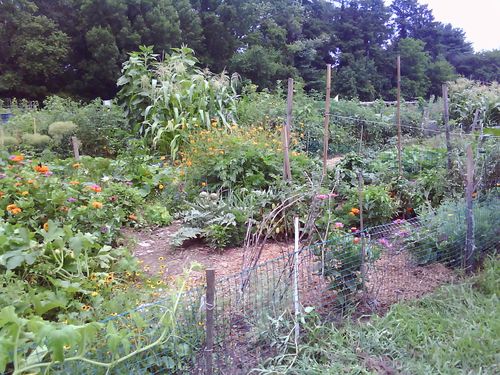 Today I gardened in the rain. I felt rich and I could not stop laughing. Because of the heat/rain/heat of last week, the weeds had just populated the entire space, and I filled five 5 gallon buckets with them, in the space of about an hour. As I worked from front to back, reclaiming the space for my own, I felt as though there was nowhere else I was meant to be. 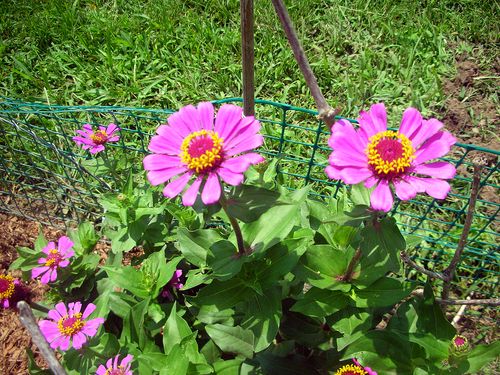 I was also soaked through with rain and mud; at least, what passes for mud here. There’s no clay in it, so you can’t call it proper mud. There didn’t seem to be any point in waiting for the rain to stop, as once it did, the temperature would quickly rise, and the weeds would be harder to pull when the ground dried again.

That’s the thing, see. Mud with clay in it isn’t dry half an hour after it got soaked through. Anyway.

Later on, I returned to work on getting my tomato plants back on track, as they all have scoliosis from so much heat and not quite enough support—started with only bamboo poles and twine, but they swiftly outgrew the usefulness of that system. I sat for an hour among the tomatoes, supporting their branches which are unreasonably, fantastically heavy with fruit.

You have not lived until you have sat for an hour, by yourself, surrounded by tomatoes and their branches and leaves. This is not up for discussion.

Look what I discovered! 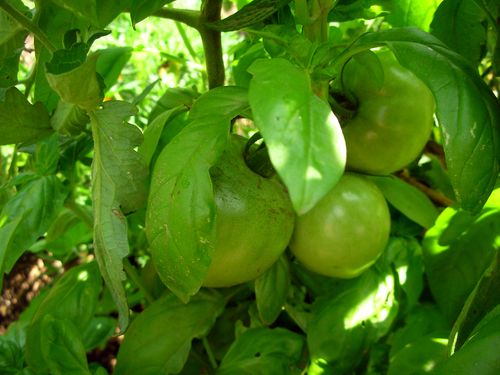 This tomato vine wrapped itself around a section of basil. That’s a gorgeous symbiosis. The basil plant is supporting the fruit as it grows. I always plant basil with my tomatoes. They love each other. Have you ever thought about how many plants make great growing companions with plants they taste great with? Not all, but many. Tomatoes and basil, squash and beans, eggplant and peppers. It’s very cool.

This is a sugar baby watermelon. 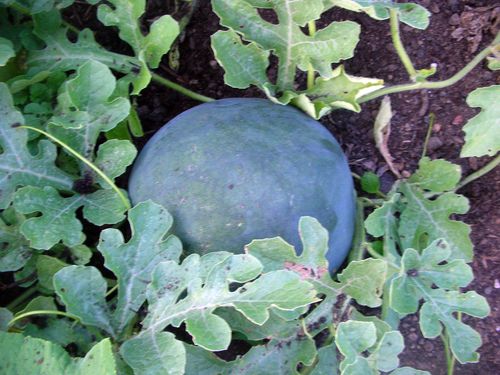 It’s probably ready for picking, or else very close. There it is, all dark and dull and dry, but when we cut it open, we’ll be rewarded with juicy sweet red flesh. So much of life is like that, isn’t it? What you think you see isn’t always what’s actually there.

I have to go paint now.

Next up: chokes, music, the moon, circles, and babies. 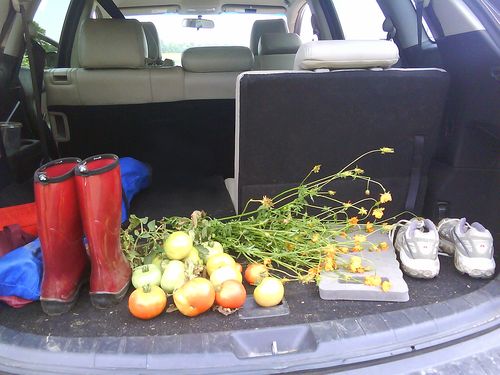 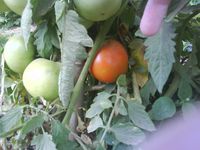 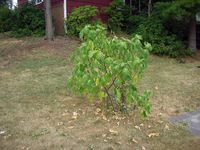 The tomato plants were loaded up with fruit before the earth began baking. But the figs may not fare well. If it's too hot and dry for long, they will not blossom this year, to conserve energy. No blossoms, no figs. So, we'll see. 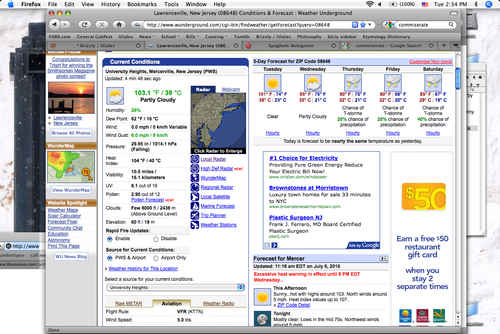