I suffered over this painting long enough. It has now replaced "Wet Jazz" in the living room. 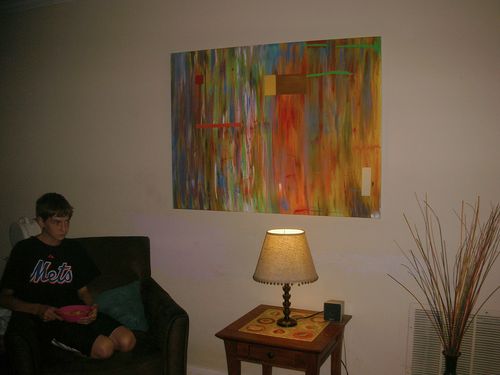 newpainting
I need to paint that wall, though. I'm thinking it should be the color of the 1962 Sinatra-Basie Reprise label (um, greenish-gold...oh, here) 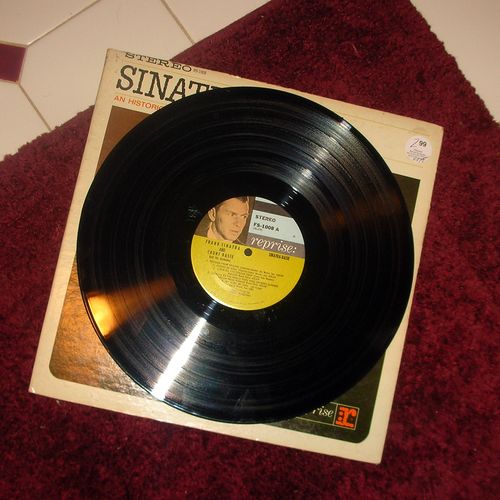 Sinatra-Basie
only slightly paler. Right now it's kind of just pale putty-colored, chosen by the previous occupants, seen better in the photo below. Three walls that color; I painted the back wall darker a couple years ago.
Here's "Wet Jazz."

Wet Jazz
I think that Jazz period was actually a departure rather than an evolution from what one might very generously and laughingly call "my style." But I do like this one, and if I come across another large wall space, I'll rehang it.

I made pizza on Wednesday. Because of the weird weather, I was in between tomato harvestings until today, and used canned. I think that's all right; better those than "fresh" winter tomatoes from the grocery store produce section. If tomato season is over, it's over, you know? (Though I do like these little imported Italian ones that Costco has sometimes, but that's another story.)

I might wax on about how to make a good pizza in the food blog on another day, but the next entry there will be a garnish one and also butternut squash and leek soup. 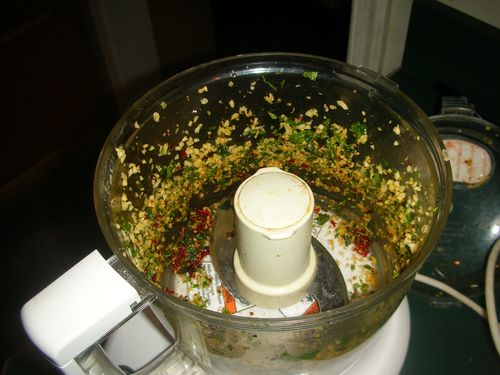 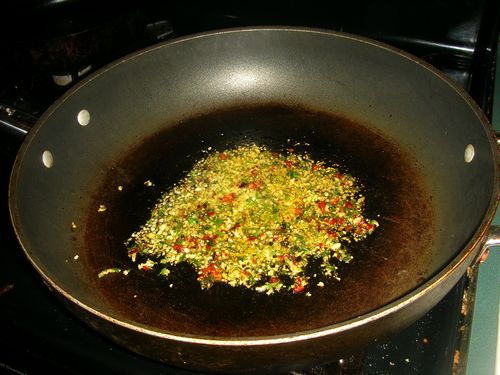 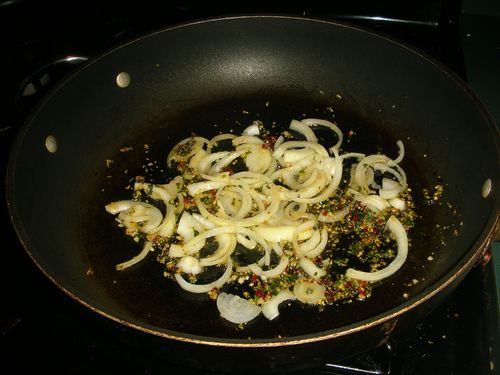 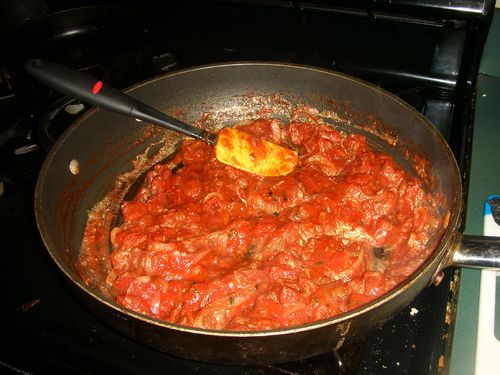 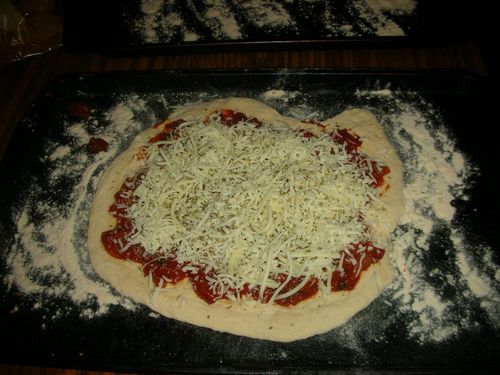 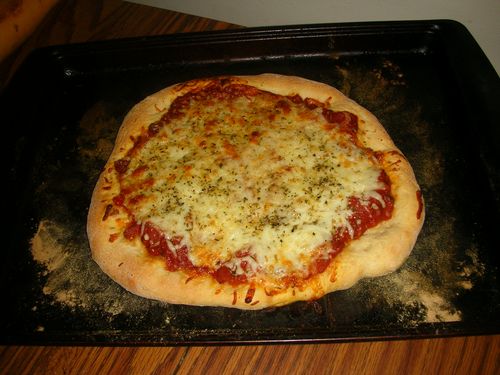 DSCN8899
Plus a splash of vermouth before adding the tomatoes. A splash of soup stock would suffice. Reduce for a couple minutes, then add tomatoes and paste.

What was your favorite movie of the summer?

I think I saw three movies this summer. I rate them purely on my looking-at-the-screen experience.

Ironman 2: I had a great time! Will watch again.

Toy Story 3: I had a great time! I was so impressed. Will own.

Scott Pilgrim vs The World: I had a great time! I was so impressed. Will own.

Those last two have to be a couple of the best movies I've ever seen. 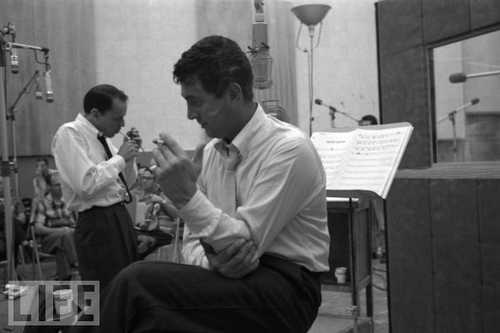 "I don't discuss his girl with Frank or who he's going to marry. All I discuss are movies, TV, golf and drinking." –Dean Martin, date unknown. Pictured: The stars, photographed in a recording studio by LIFE's Allan Grant, take a cigarette break during the recording of Sleep Warm in 1958. The album was re-released in 1963 with a much more direct title: Dean Martin Sings/Sinatra Conducts. 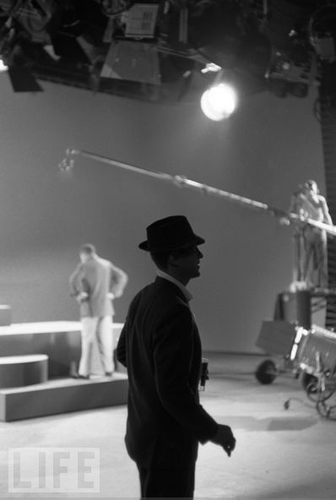 "He likes to pretend that he cannot remember lyrics and, blowing a line while singing, will gaze appealingly heavenward and plead, 'Don't just look down. Help me!' When he is on stage with other famous folk, the air is likely to clatter with competitive ad libs, many of which have been polished to perfection by re-use.... A favorite Martin target is his ex-teammate. 'These muscles,' he will declare, flexing his abundant supply, 'I got them from carrying Jerry Lewis for 10 years.'" —From LIFE's "Make-a-Million Martin," 12/22/1958. Pictured: Martin on the set of an unknown production that year. 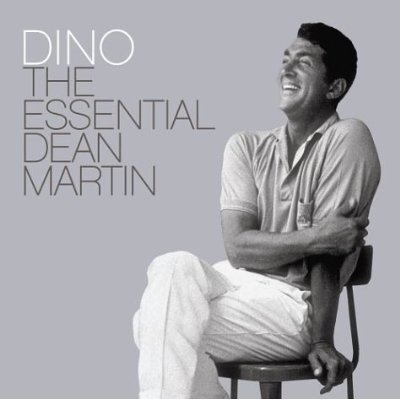 the promise of frosting still in the bowl

It's been one year since I saw my dad for the last time.

I had some kind of epiphany today—I make sure this occurs each August, long story—about how much I do not accept endings. Of anything. No full stops

Sentimental Journey
Frank Sinatra
I'm always in the middle of now, everything's always ongoing, and, possibly depending on how you look at things, it might seem that there's a certain amount of fiction floating through whatever seems to pass for reality. If I were just in control of life, that might be less necessary, but things are as they are, people going around rubberstamping stuff whether it's their business to or not, and if you look at things the way they do, I don't see how you can ever have any fun at all.

I had a lot more to blather on about that, but the words feel a little locked up right now. It's been a lousy summer. (great tomatoes, though.)

So I seem to mark events by their dates, more often as I grow older. "Future" is a weird concept...It's likely I'll be in here again in a couple of weeks musing over life, the universe and everything...but for now,

I moved my easel to work on my painting. I had the canvas vertical and was painting horizontally, but now I've turned it on its side to finish. Someone broke my clip-on light bulb and that same someone lost my blue tape, and the cat freaked out because we have another guest dog here (but he does have a solid home to go back to,) and peed in here somewhere. I'm allergic to that. I have to find it and scrub the floor after I do whatever this is.

Part of the reason I moved the easel was that she'd done that in the dining room and the odor won't be put down so tomorrow I have to totally reclaim the floor if possible, so I can breathe in there again.

It's a little weird, to be fully in the middle of hope and disappointment pretty much all the time. One is future and one is past and they never ever end, because, you know, perception or whatever, and all I really want to be is now, if not so much into the here. The raft at the swimming beach at Smith Mountain Lake was the place to be.

Laura Petrie Dick Van Dyke Show
Back to the epiphany.

Possibilities always exist if stuff doesn't end. I'm the Anti-Kutner-Suicide President. What the good golly (you can say fuck if you want to) was that about? Now, whenever you watch seasons 4 & 5 of House, you're always waiting for him to inexplicably off himself. Sometimes they show a marathon on TV, slightly out of order, so you never know when you might be hit with it again.

I know this is the reason people are desperate for an afterlife that is recognizable to their current selves. I'm just good with knowing that matter and energy don't exactly decrease or stop existing, only change form. We don't ever end, no full stop, the form is not so important if it's part of everything created. If you believe stuff's created, I figure you believe created stuff is all good. Otherwise, what's the point?

It doesn't pay to try to figure out one of these epiphanies. And I haven't even been to the woods yet. Best to just let it ride for now. 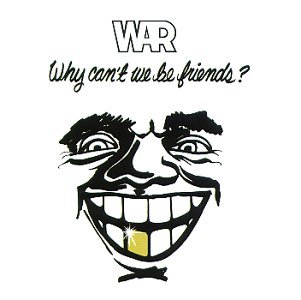 Low Rider
War
I like only a couple of my finished paintings. The others still feel like works in progress. I have two that are officially so, don't seem to be able to make myself get to a stopping place, but even when I do, I think it's okay that they still feel like part of process and progress. With strange side light and no tape for something I'd planned, I'm going to try to complete the big one tonight. Bravo's showing House (though they're showing the stressful plot arc with that maddeningly boring evil cop,) then Mad Men will be on; I'll make a big martini and let the brush go where it will.

This'll all make more sense in a couple of weeks when I try again.