The foods and blessings of our people

As Jeff Smith wrote in The Frugal Gourmet Cooks American, "Italy had no tomatoes, Ireland no potatoes, and Switzerland had no vanilla or chocolate. Spain had no bell peppers or pimentos and China had no corn, peanuts or sweet potatoes. These last three edibles kept most of China alive at the beginning of this (20th, of course,) century." Whenever I read this list I always wonder what on earth people ate before Columbus bumped into Central America and ravaged the place searching for spices.

You might know that in this very large country, people settled in different areas depending on where they came from, almost from the very beginning. Starting just after the country was officially formed, and particularly increasing in the 1850s because of German shipping innovations, the mostly English United States began filling out with Germans, Swedes, Poles, Lithuanians, then came the Irish, Italians, Chinese, and all the rest. People from all over the world created the United States, and nearly all the food we now think of as "American," by taking the resources available to them here and applying their ancestral creativity and frugality to them.

I hope we all understand by now that it's too simple and too silly to say, "Your ancestors did this awful thing," "your ancestors did this other awful thing." They all did, you know. They did awful stuff, to the land, and to each other. Disputing that or calling one group worse than another is very silly. They've each had their turn. I am not directly related to any American slave owners, but I'm certain that a number of my ancestors were just as awful as anyone else in other ways. Because in all periods of history, people are truly awful in some ways and just wonderful in others. It is the way of humanity.

This Thanksgiving, as we raise a glass of wine in honor of blessings received, we can thank the Spanish for bringing vines to California from Mexico; vines that had originally been stuck there by the murdering Cortès. We can thank the Chinese men who dug and planted and built the California vineyards of the late 1800s before being shoved out in favor of "white" labor. We can thank the French and Italian and Spanish families who continued their innovations here after a severe epidemic in Europe destroyed many crops, and we can thank the people who clung to their efforts through the long painful period of Prohibition.

We should enjoy that glass of wine with the knowledge that we can make the best of who we are with all we have, and that being able to share our best with others is the richest blessing of all. Leave the squabbling over who is worst for another day, or maybe finally give that up for good.

Guess what? It's Election Day! Gosh! 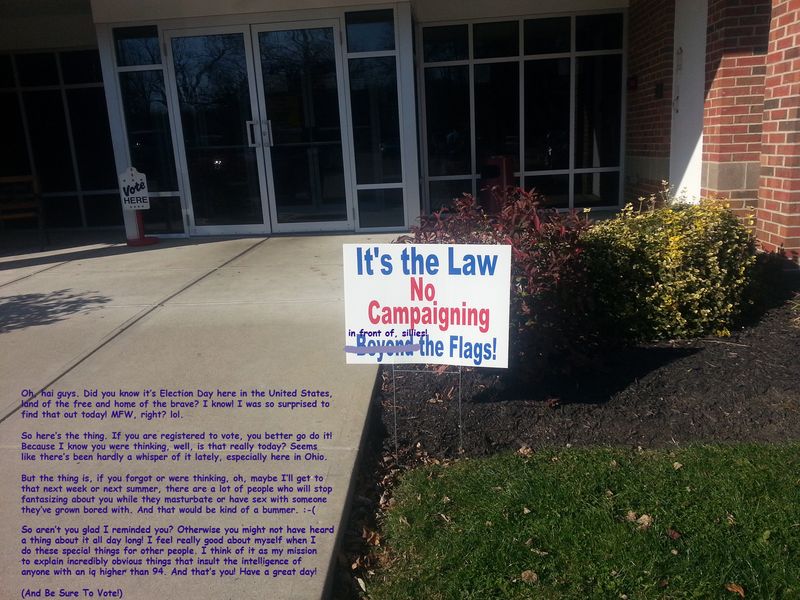