Me, my brother, (and Dennis Wilson)

Yesterday the intro of this song came to mind and it took all night and this morning to remember which one it was.

I knew it was on my double album compilation by the Beach Boys, Spirit of America. I remember getting it in summer, 1975, from the Columbia Record House music club. That summer was very different for us; well, that season, my timing is fuzzy. It was the first time my dad moved out, and there were just three of us in the house, my mom, my second brother, and me. I was ten and he was sixteen. I don't remember much of him in that period of time beyond his surly attitude toward me. That summer, though, he was nicer to me than usual. The three of us spent a lot of extra time together. I have written down bits of it over the years, however, I was too disconnected from people early in life to have as many memories as I'd like. That's a tale for another time.

I bet he asked Mom to join the Columbia Record Club and she made him let me have some of the albums. But it's just possible we conjured the idea together, that year and no other. Only he thought I just wanted whatever he wanted, to annoy him or because I had no mind of my own, something like that, when in actuality, we just heard and recognized the same stuff. He got there first, and I took leftovers. And anything I listened to because he'd played it first, well, that was a compliment, even if he didn't know it then.

That subscription, however well or poorly it went, and I cannot speak at all to that, was my launch into record collecting. I had a fairly large collection by 1987, when most of it was stolen. But we won't discuss that. When we chose our eleven records for a penny, my brother got six and I got five. He got Wings: Venus and Mars Rock Show. I got Wings at the Speed of Sound. He got The Beach Boys: Endless Summer. I got The Beach Boys: Spirit of America. It's no wonder I seemed annoying to him. And I remember him telling me his Wings and Beach Boys albums were better than mine. They probably were, but I've always just adjusted to what I get to have, and so I liked mine best. I also chose two Captain and Tennille albums, and right now I don't remember the fifth one. I'm sure it was silly.

My brother introduced me to some great music over the years, as did my older brother and my parents. When I was a young teenager, he gave me Natalie Cole's Inseparable for one of my birthdays. Remarkably, it's one I still have, and I still enjoy it. When I was eighteen, he gave me five reggae albums, and I listened to them endlessly for the whole summer and beyond. But those were stolen later on.

Quite a lot of my record collection, in addition to albums and singles I chose myself in good taste and bad, were leftovers from the rest of my family. I still thank them in my heart pretty much continuously for the variety they taught me to enjoy, from my earliest memories. They didn't give me Frank Sinatra or opera, but I'm certain they led me to them both.

I wrote two more paragraphs here, only to realize they deserve a separate space.

My brother definitely gave me the Beach Boys, and I was just mad for them for many years. These days I hardly ever listen to them, except a few select songs, yet I'm always happy when I do.

I hadn't heard this song in many, many years, but it is the first track on the now-unofficial collection I had, Spirit of America. Carl plays so cool, but watch Dennis wail on the drums. Also, I guess they had to clock in under two minutes, because it's definitely played faster than the recording.

I had such a thing for Dennis. Oh, hush. You surely know something about me by now, even if you didn't then.

Jim Garner and Me

A few days ago I repainted my sitting room. As I was replacing the books on shelves, I noticed The Garner Files and had that melancholy thought we sometimes have when we follow along with someone, "guess he won't be around pretty soon." But I wanted a claim to stake, somehow. I always have, always have been possessive of him. It's why I rarely bring him up when waxing on about film stars. Too special, too much, too much not enough. Closer to my heart than any of the others could possibly be. And then some.

I don't have a possessive or competitive nature, yet I've felt this tiny sense of ownership ever since I can remember. Literally, far far back, when men were heading to the moon, and boys were heading to the jungle, and I rode around on my dog when no one was looking. The tall black-haired man on TV was mine. It was a deep, aching sort of desire and need and pleasure I could not have defined then, of course; I just remember it as an overwhelming sensation. All mine. And I never actually stopped believing that, to be perfectly honest, even though I'm older now than he was then. I grew up and he grew old, and that was all right by me, for as Madeleine L'Engle so perfectly stated, "I'm every age I've been." This is especially true for movie and TV stars, especially now. We see them at each stage of life, and in this era, we can see each stage in a matter of hours, minutes, even. Star stuff that's ever colliding and producing light.

People have often accused me of having far deeper thoughts than I am usually interested in having. Early on, they'd sort of tricked me into thinking I was only a brain, and therefore meant for all kinds of higher brainy ideas and functions. But I'm a fairly simple person, in reality. My ponderings don't run very far below the surface. My impulses are physical, and thinking about why for very long just gets in the way. I like knowing about tomatoes, but if I didn't, I'd still enjoy pulling one from the garden vine and biting into it, soft and warm and sweet, just as much as ever. I'd still stop what I'm doing in silent appreciation of a horn solo even if I knew nothing of music.

That's the only way I know to describe my lifelong love for Jim Garner. It's deeper than just about anything could be for me, but it isn't a words thing.

He was well-loved by his family and friends and that speaks better of a man than anything else could.

Rest in peace, first and best love, a cherished treasure for many, (just mostly all mine.) 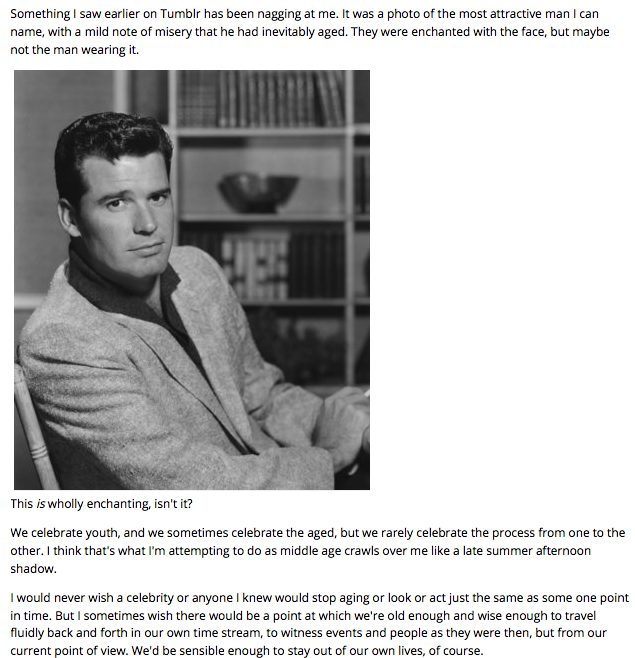 This week marks the beginning of our fourth year in Cincinnati. New Jersey seems farther away now. I still miss what I had there that I can't have here, or anywhere else, in fact. The sea, the history, the city, my daughters. Pizza just as I've always liked it, and real delis. A world, too, wholly unlike what people who've never been there think of it.

There's good stuff here that sets this place apart. The symphony, Jungle Jim's, and amazing thrift shops, to name some. This room is finally "finished" after three years of collecting from thrift shops and also Target, and the finishing touch was covering the dark sage paint with a creamy light blue. 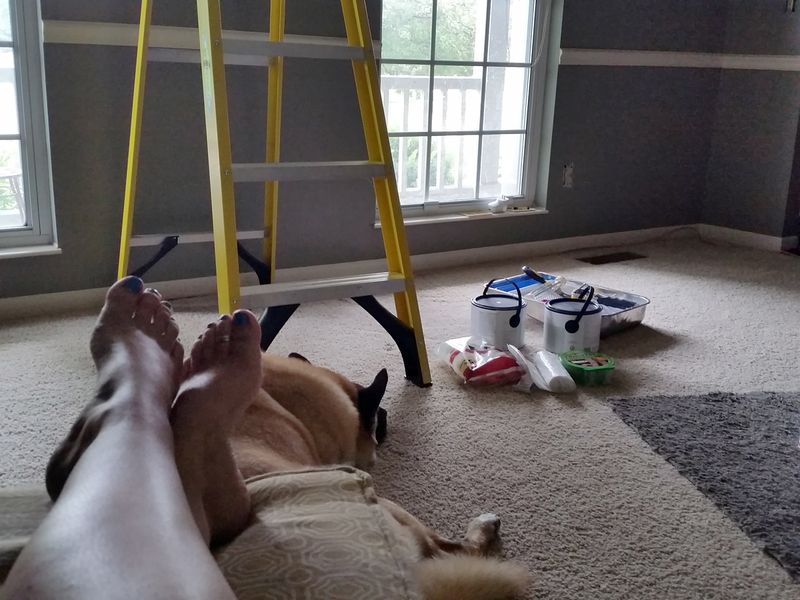 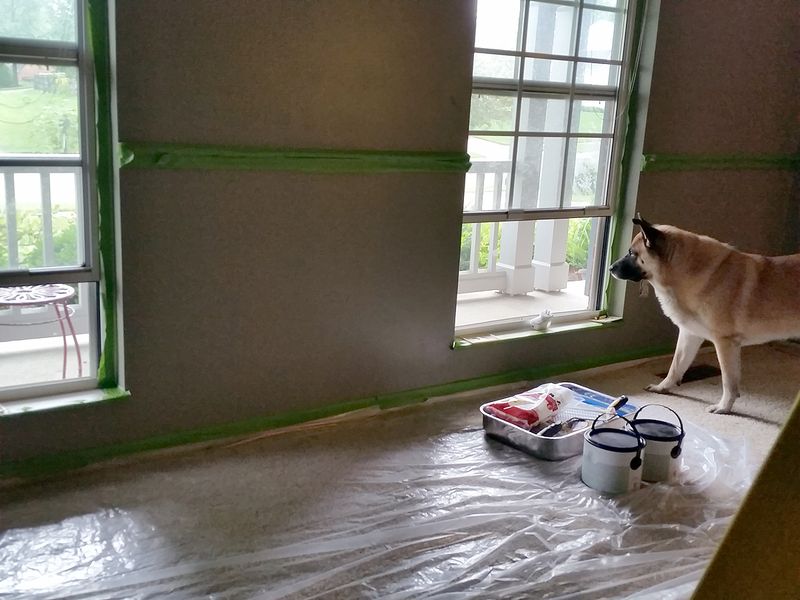 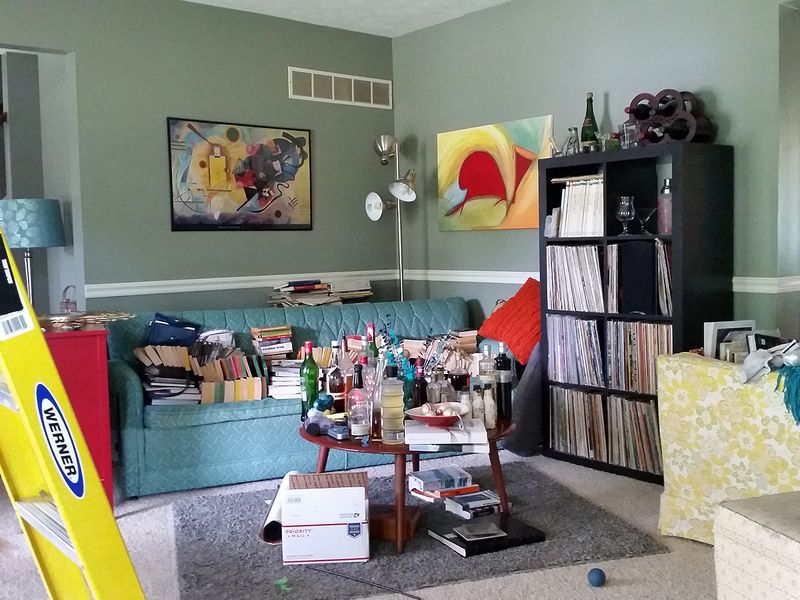 It's a room I've always wanted, except for horrible cat (I don't care if you think cats are Gods; you wouldn't think much of this one,) and no real company with which to enjoy it. My sons are pleased with the result, too, though. Last night we enjoyed lounging around until late into the night. 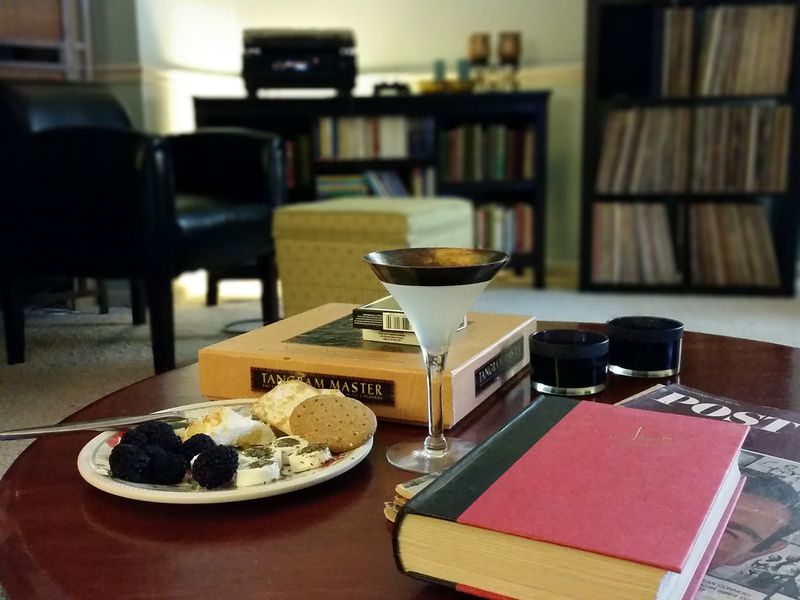 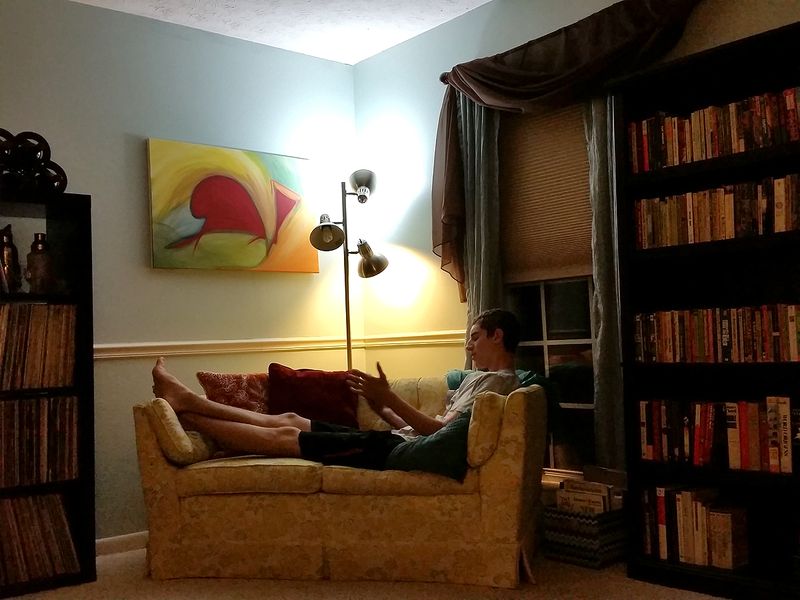 The back open area with the fireplace, TV, PS4, that's made up of a collection of  things from various homes, it all just drifted together into a fairly pleasant "Mission style" kind of space. This, however, was all chosen by me, every single thing in here, except the cocktail shakers and turntables, which were gifts. 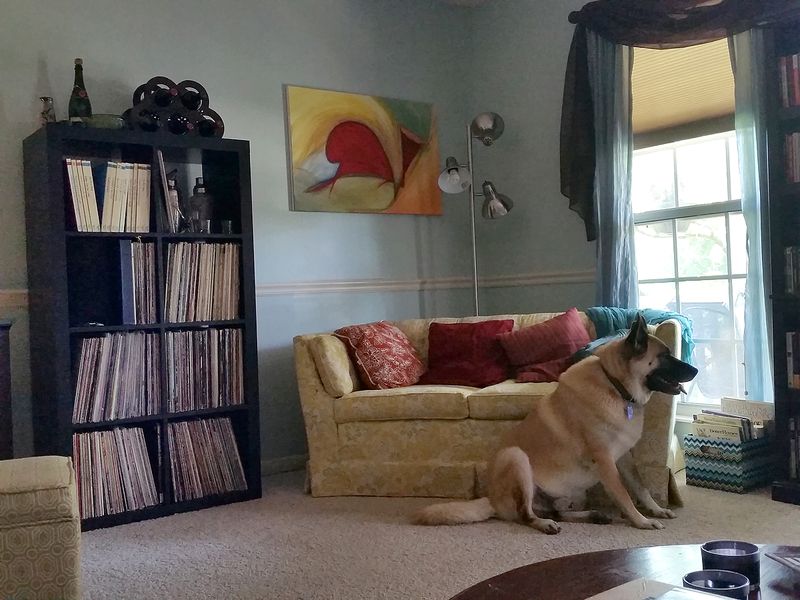 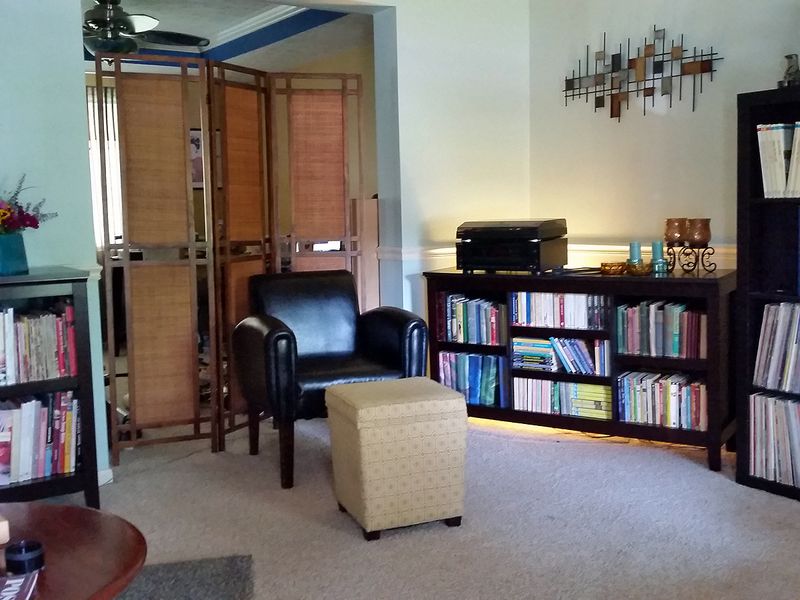 The two couches were from thrift shops and in perfect condition, until cat. But they are okay for the space. The stereo receiver also from a thrift shop, and the coffee table, many of the books and records, most of the magazines. The one extravagant purchase, though you could hardly call it that, is the pair of Klipsch bookshelf speakers.

Inside the "liquor cabinet" are many fun little glasses from St. Vincent de Paul, and an old hand crank ice crusher. I painted the pictures. 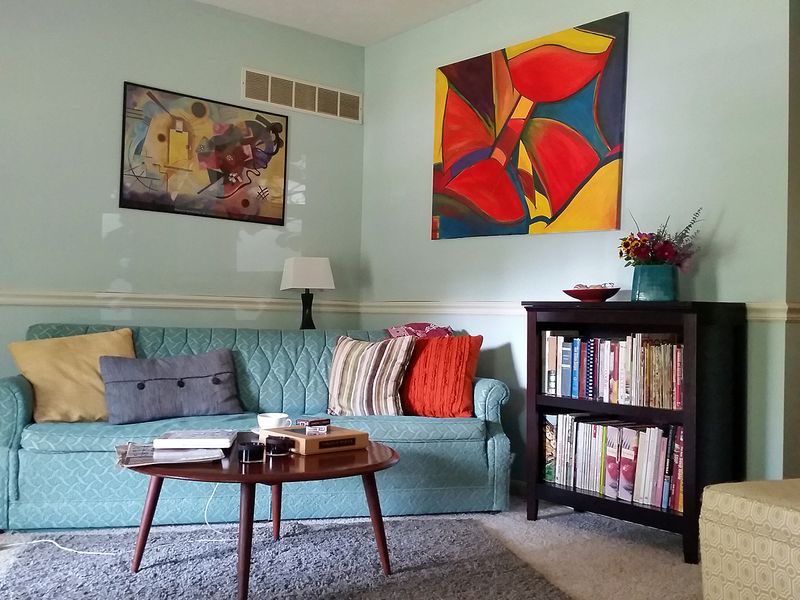 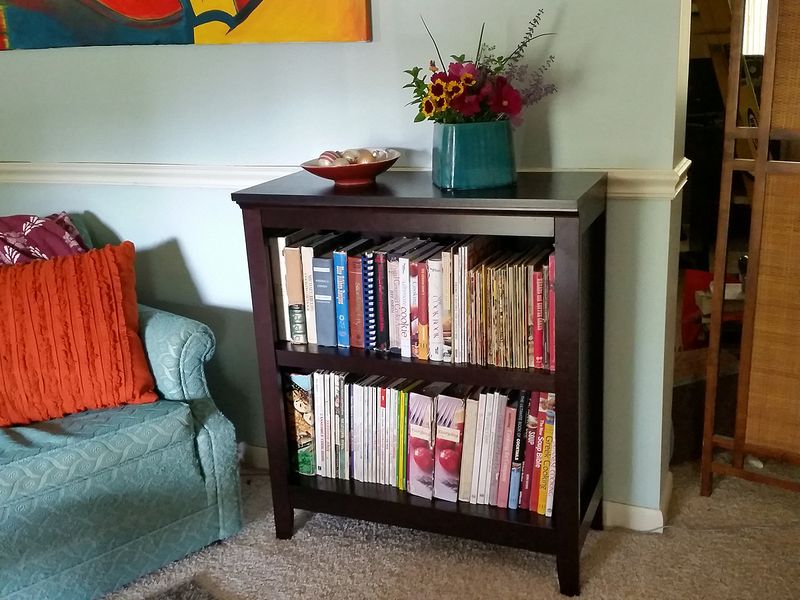 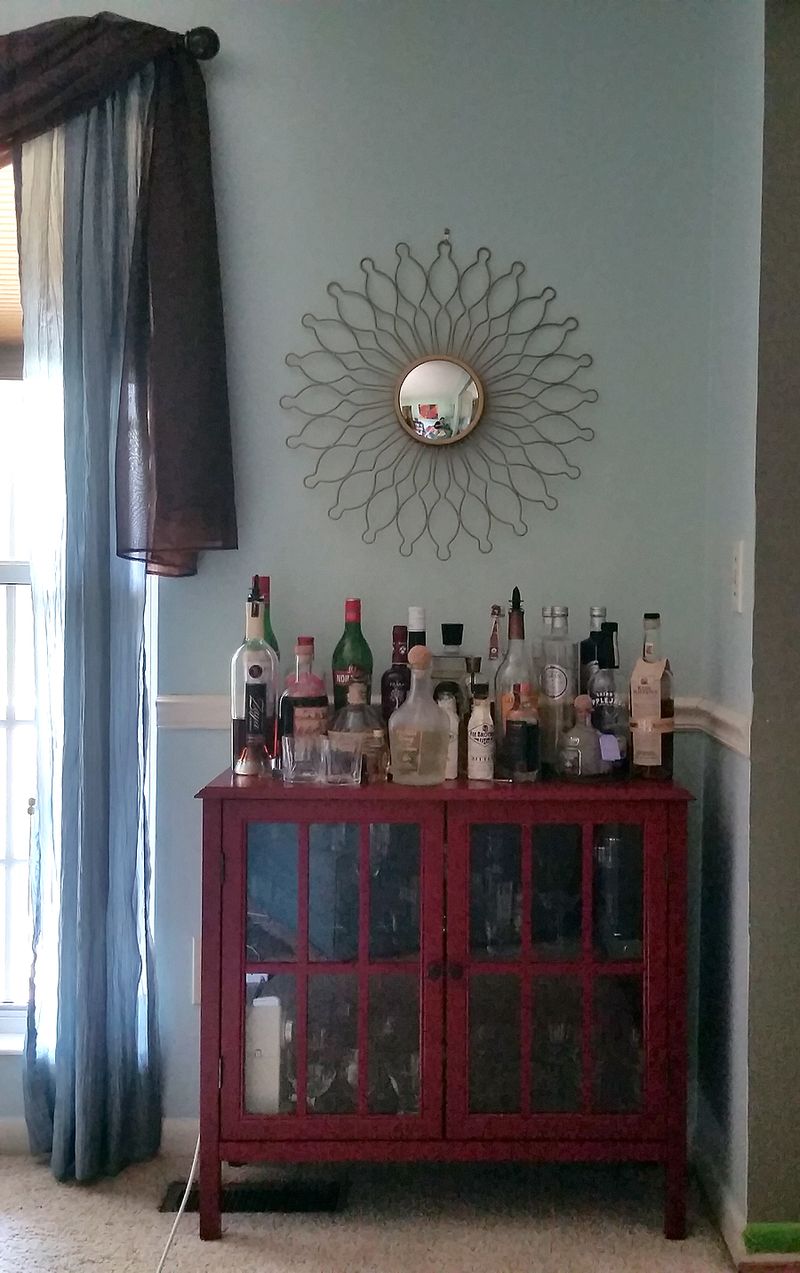 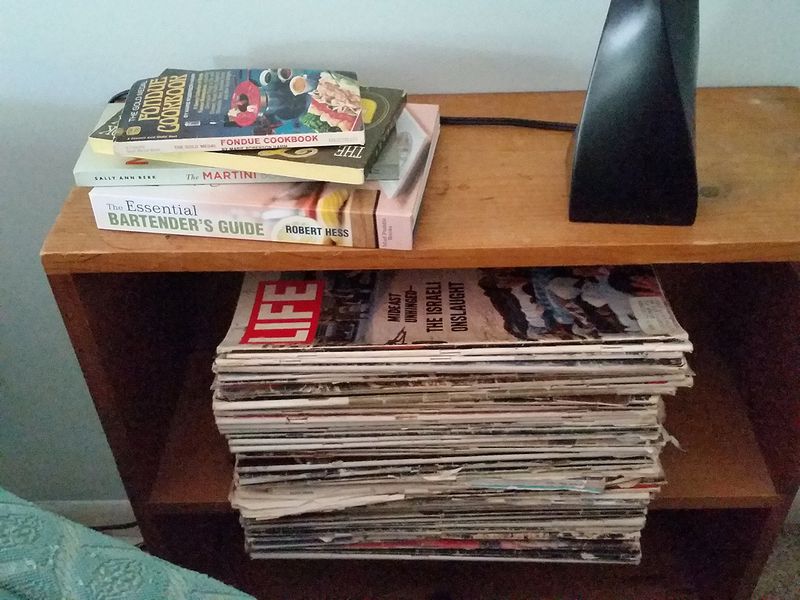 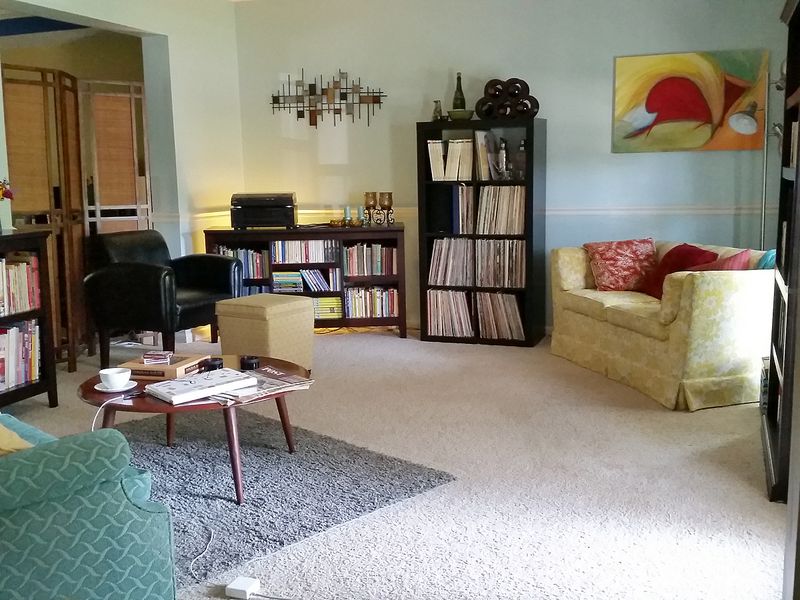