I went into Hancock Fabrics this morning because although I want to collect some vintage fabric to sew with, I thought I might find some in a vintage style for my new crazy quilt project. I hit the jackpot; there were many bolts of clearance prints, and they reminded me of what old people wore when I was little, so then I thought, hey, there's my crazy quilt theme: Throwback to 70s Childhood.

And so I bought ten 1/4 yard pieces plus fourteen skeins of embroidery floss for just about $11 after all the discounts and coupons. 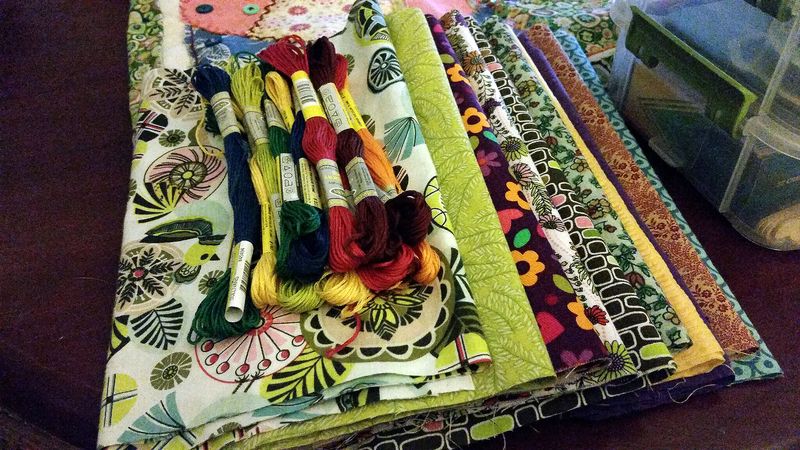 This allowed me to indulge in some sale buttons, as well. Anyway. That’s not the thing.

When I walked in, these clearance bolts were right in the front, and I saw one I just loved. I remarked to the woman straightening them that I found it beautiful but knew I had no use for it. If my sewing machine hadn’t declared war on me, I could have done something with it, but it wasn’t a hand sewing kind of fabric and design. Anyway, she saw me slinging bolts into a cart and told me where I’d find more. I’m sure it worried her I was going to mess up her neat reorganization, but I know just how that feels and so I trod lightly along the path.

I’d sent Aaron over to Kroger to pick up a few things while I was in the fabric store, because it’s a final exam day so his schedule is not really one, and then he came in to watch me sorting through buttons. Because of him I chose owls rather than dragonflies, which apparently menace him, and then I sent him to the cutting table with the cart full of fabric bolts, so I could finish looking around. He will be a superb shopping husband someday. The same woman was cutting the fabric when I got there, and listened to me chatter on to Aaron about silly things. I told him Livvy said the newer sewing machines adjust tension themselves, “with wizardry or witchcraft, magical workings, I dunno,” and she stopped cutting and said, “It’s a computer chip.”

I laughed and carried on in my slightly demented mood. I told her my sewing machine and I are warring, and then mentioned to him I hate to buy a new one because mine could kill someone if I picked it up and hurled it at them. He wondered just how far you could hurl it if it weighs so much, and I said, “The point is, I am just old enough to think things should weigh a lot or they aren’t any good.”

Then I pointed out a very fancy machine which does everything and said, “I can bowl.” He laughed. “And I dig in dirt. This is not for me. But I used to be such an early adopter of technology, I don’t know what happened.”

And I knew she was still listening, cutting ten things, so I told him about the town in West Virginia where there is no wifi, and how Time magazine says people are addicted to their iPhones in a peculiar way, and we talked about how we use our phones. I’d be uncomfortable without mine, sure that someone would have an accident if they couldn’t call to tell me they’re fine. But otherwise, meh. I’m over this stuff.

As we were checking out, the woman asked if I had the latest flyer, and I hadn’t seen it, so she found three coupons in it for me to use, and explained over and over again how I need to keep an eye out for those, and I realized, “she thinks I am truly an idiot after all she’s heard.” This amused me. She went over it all again, patiently, but in a very neutral tone; one type of coupon has changed. And I shouldn’t worry about bringing in more than I can use, because the computer recognizes dumb things and won’t allow them to make mistakes. “Not that we’re what’s dumb,” she added with no expression, realizing she was speaking aloud to a human being. I smiled and nodded and thanked her at each appropriate turn, COMPLETELY RELATING to how she felt trying to help a clearly witless person save money and do things the right way.

I mentioned that to Aaron as we walked to the car, and all he could say was, "I had to walk away because she kept saying "cyoo-pon."

But I am now thinking of her fondly, an ISTJ who is probably exhausted by the end of each day, rearranging things, sighing over the inefficiency of her boss, and helping people press the red X on the card pad because it doesn’t do debit, but all in all, it’s probably a pretty good job to have most days in your 60s, and I hope she has a rewarding time of it.

This is the streaming opera for you to attend! Fun and beautiful!

The Merry Widow is an operetta, which means the story and music are light-hearted and quickly paced. This production is sung in English (for operas in other languages, subtitles are provided,) the principal roles are played by two Americans; Renee Fleming and Nathan Gunn, who portray middle-aged people getting a second chance at love, and it also features a Broadway musical star, Kelli O’Hara. The staging, costumes, and sets were all created by Broadway veterans, as well. There are dancers and dancing; more than you will see in most operas, more dialogue than in a typical opera in which all or nearly all of the story is sung, and there are also plenty of laughs.

You can check fathomevents.com to find which movie theaters near you are showing The Merry Widow, either streaming live on Saturday afternoon, January 17, or as an encore the following Wednesday evening. Tickets most places are $22 and $20, and it is well worth it. You’ll see varying camera views, close-ups, behind scene staging, and interviews with the stars, as well as have a few minutes to step out between acts. After the first act finishes, the hostess will speak to a couple people, then you’ll see a countdown time (something like 10 minutes) on screen letting you know how much time is left to step out. At that time, a camera will follow backstage action. But after the countdown, there will be another interview or another peek backstage, and/or a preview for upcoming attractions before the next act begins, and then a similar pattern is followed between the second and third acts. The whole thing including intermissions should take about 2.5 hours.

This is a ten minute video with discussions on the production, sets, and costumes, and excerpts from rehearsals, and I think it will make you want to go.

And here you can watch Fleming and O’Hara sing “Silver Bells” together.