I've been watching James Bond films all month on Encore. I do that pretty much every year. I have my favorites, and there are a few I tend to avoid, and watching Bond interact with his contemporary society is always interesting. They aren't in order, so the view is sometimes amusingly jarring. Or not even all that amusing, as I discovered last night.

I had my 16 year-old watch Thunderball with me. Near the beginning, Bond is at a health spa, and someone tries to kill him with one of the machines designed to...help with back alignment or something. The sexy spa attendant thinks he'll blame her and cause her to lose her job, so he suggests sex in the sauna as payment. She straight up agrees, and seconds later, you see their hands pressed against the glass.

My son kind of flipped out. Which, if you know him, is the actual jarring thing. He had just witnessed a woman blackmailed for sex, and he knew it. Later, when she's revealed to be a bad guy, I asked him if that made any difference. He said no, and mostly of course, I agree. I imagine there's a subtext of her having gotten under Bond's skin so he'd trust her, rightly played or not.

Later I pointed out to him that during the Roger Moore era, the solution was to just have all the women rabid for sex. Then during the Pierce Brosnan era, women actually have a sort of power to not take him seriously, but take what they want from him. That's how 70s, 80s, and 90s women were each represented in film.

Here's how the problem was managed with the 1995 GoldenEye "reboot," neatly, in two brief conversations. 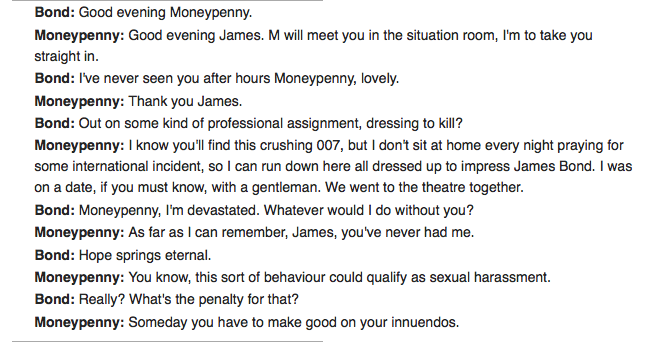 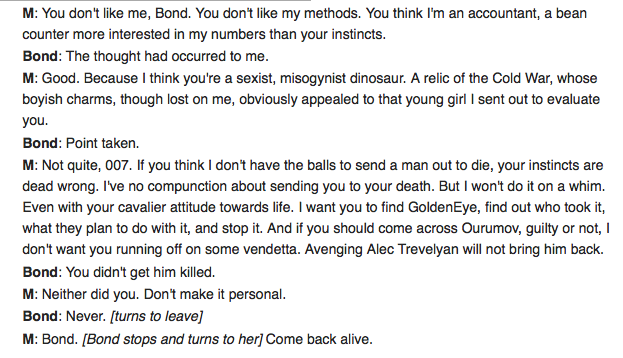 There are two more conversations that address the reality of Bond having treated his life's work like a merry game; killing bad guys, having many women, and in the post-Cold War world, possibly less able to stop real problems.

Later on, Bond and the character Xenia are in this scene in which she clearly takes pleasure in a fight that mirrors quick and ferocious foreplay. It's a bid for control, and she loses, but not because she's a woman, but because it'd culminate with Bond losing his head.
In our Daniel Craig era, the films still generally reflect our times, and currently, female characters are offered up with more variation of character, but at the same time, they're still James Bond movies, and sex is still power, both the wielding of it and the yielding to it.