Part one of shopping done; indigenous foods, check. I didn't prepare fresh pumpkin this year as I sometimes do, but it's one product that is completely fine bought in cans. Good for babies, too, as I've mentioned before. 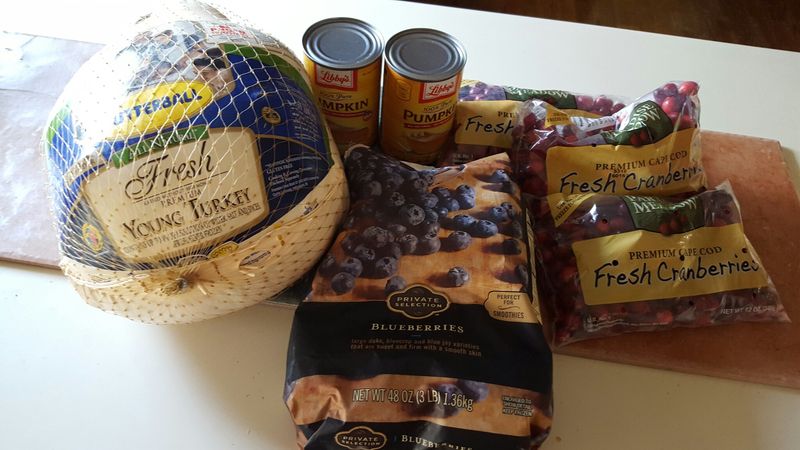 Of course, we always have these foods because they're truly American, as is maple syrup, which I add in small measure to the sweet potatoes. So are pecans, and this year I'll probably make a second pumpkin pie with a pecan topping, rather than pecan pie on its own. I'd rather make pecan tarts at Christmas. Anyway, what I mean is, these are the most important usual Thanksgiving foods to me, but I don't prepare most of them in the ways many other people think of as traditional, because I really never liked them that way, and I'm in charge of things, since 1990. Mostly. (If you are also in charge and don't like a lot of mushy or sticky or etc., you are free! Let it go! Cook the things as you like them best.)

Sometimes we have cherry pie instead of blueberry, but when we do, I like to still include blueberries in another way. This year it'll be pie, though.

Besides the indigenous foods, there'll be sweet potatoes, of course, mashed with holiday maple syrup sweetness, and a little butter and zest from the orange that goes into the turkey, and we'll go on Wednesday to pick out our green vegetables. Most commonly I steam fresh green beans in a pan with very simple seasonings. But we might do different things this year.

Also to buy on Wednesday, sherry for the turkey gravy, Zinfandel for the table, and bourbon for the pecan topping. The bourbon is indigenous, too, of course!

You might have noticed my turkey is not frozen. It costs a whopping $1.99 that way, but that is still definitely bargain meat. If I bought a frozen one for less, chances are I'd have to buy a larger one than I like to cook. So, 18-20 dollars for giant unwieldy turkey we'll never finish, or $27 for the size I prefer to prepare and fit into a pan in my oven. No contest; there are still weekend leftovers, a good carcass and neck for broth, and giblets for the dog and cat.

When I know there'll be more than six to give dinner to, I'll add duck or another meat dish, rather than buy a much larger turkey.

Finally, exciting dressing news this year. I get to make most of it mostly fruity, to suit my taste and my visiting daughter's dietary needs, and I'll just leave a section of it quite plain and bready for the son who kind of demands it that way. But with indigenous sage, of course!

I thought this was funny. My turkey has a special wrapper, and printing to inform me that it is. 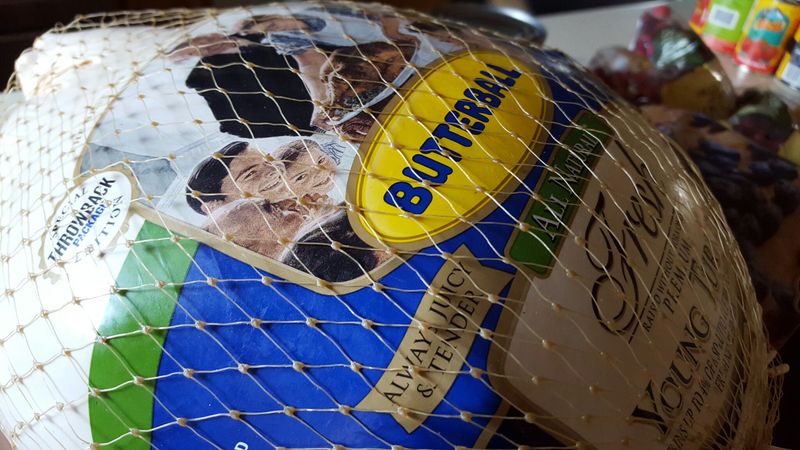