the politics of shopping

I’ve been feeling overloaded with media choices lately. I want to enjoy so many different things, I can’t choose between anything, and end up choosing nearly nothing. But that’s not very satisfying.

Anyway, as now isn’t quite working out in terms of “time to deal with that,” I decided to work on the kitchen, instead. I was telling my brother the other day I’ve gotten a lot of kitchen items from thrift shops, and it occurred to me today that those are most of my favorite things.

Long past are the days when I needed enough of everything for eight people and then some. And it’s good to have a wide variety of baking dishes and pans, but there’s plenty else I have that seems a little redundant now, so I'm going to streamline the collection, and keep only what I love and use often or regularly.

Here are pictures of purchases from thrift shops, mostly over the past six years. It’s not all inclusive; there’s a set of Pfaltzgraff stoneware mugs and saucers, and lots of books and records, and some other things.

In the “liquor cabinet,” all the glassware on the top inside shelf and the blue cocktail glasses above it are from thrift shops, mostly St. Vincent de Paul, though the nice wine glasses are from Salvation Army.

The baking dishes are from St. Vincent de Paul and Goodwill. The stereo components, also. The couch is from Goodwill and the loveseat from Salvation Army. They were perfect when I bought them, but a cat hurt them, annoyingly. They sanitize these things, by the way, by law.

As you look at these few pictures, you will see I have launched into an adjacent personal concern in the midst of them. 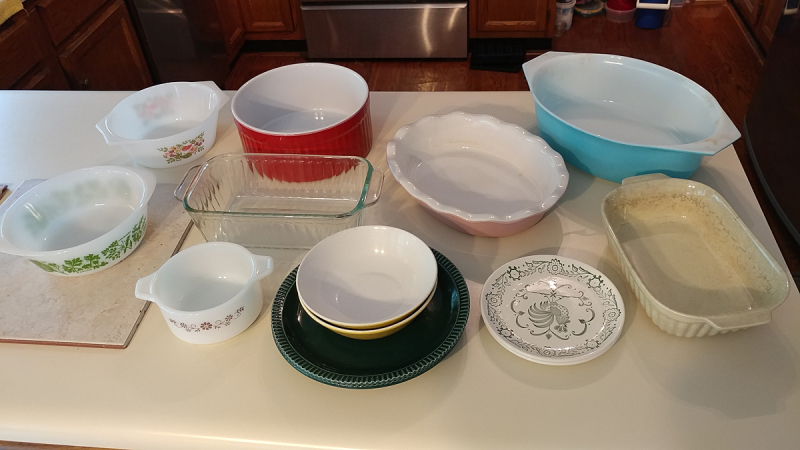 Some years ago I was discussing this with a friend, and I said, “I buy plenty of things used; why encourage them to make more?” And he said that was very non-conservative of me; the idea of reducing production. 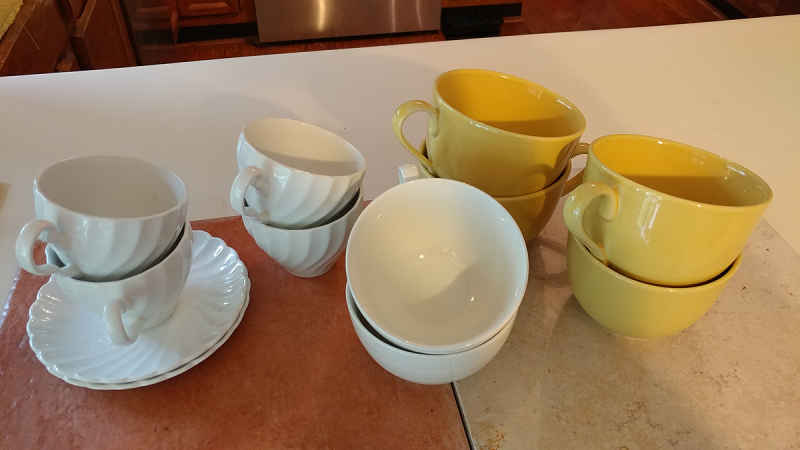 there are two more saucers in use elsewhere; also a few crystal bowls I keep perfume and makeup samples in, and things like that.

I’m kind of literal about language, though. If I say I’m “conservative,” I mean it. I’m conserving here, and I do also mean I am personally slow to change. But it is only sensible to understand when old ways and means and things are best, and when it’s better to make some changes or embrace new technology. I conserve, and embrace conservation, at home and in nature, in whichever ways I am able to. I am conservative about not throwing the baby out with the bathwater in terms of new patterns of life, but at the same time, there’s no reason to keep the river polluted just to serve people unwilling to sacrifice a little profit in exchange for the betterment of us all. Mostly I’m driven by logic, rather than by heightened emotion, which always gets people gnashing their teeth at each other, and usually gets nothing done. 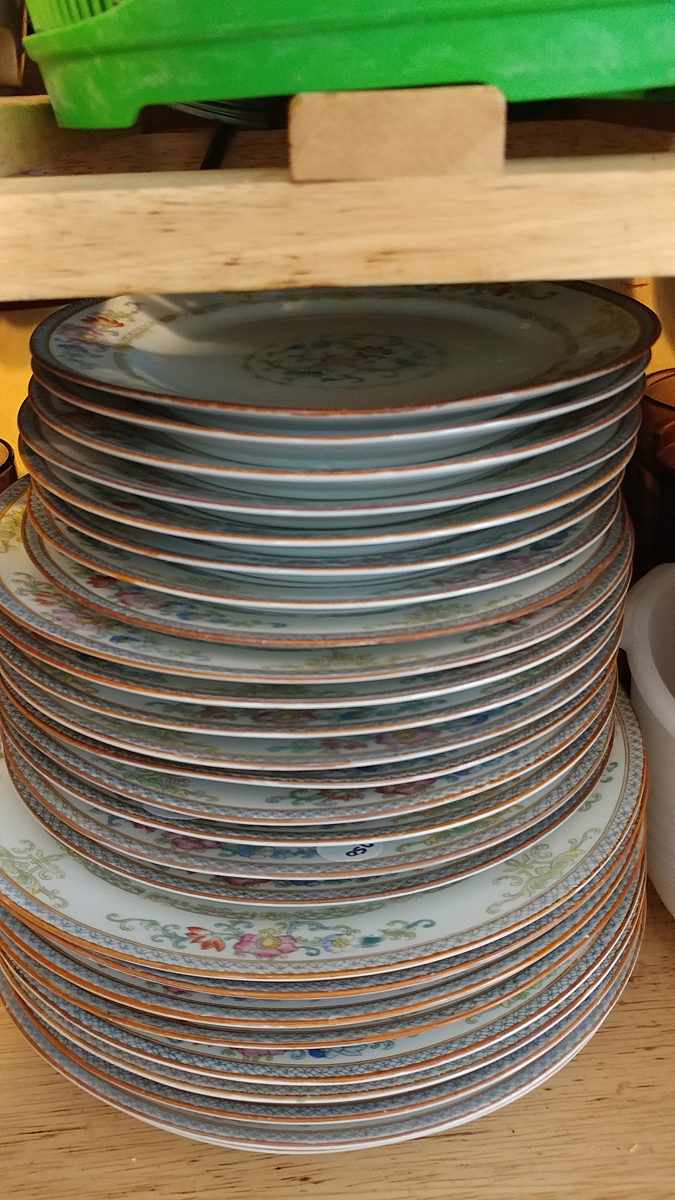 Thinking other stuff like “all the people matter,” “let’s pool our resources specifically where it can work well to do so,” and “let people decide for themselves the life they are best fitted to live,” I know that’s all been politicized into awkward sports teams that spend all their time arguing with each other. But team sports are not my thing, and dogma is dreary, at best. 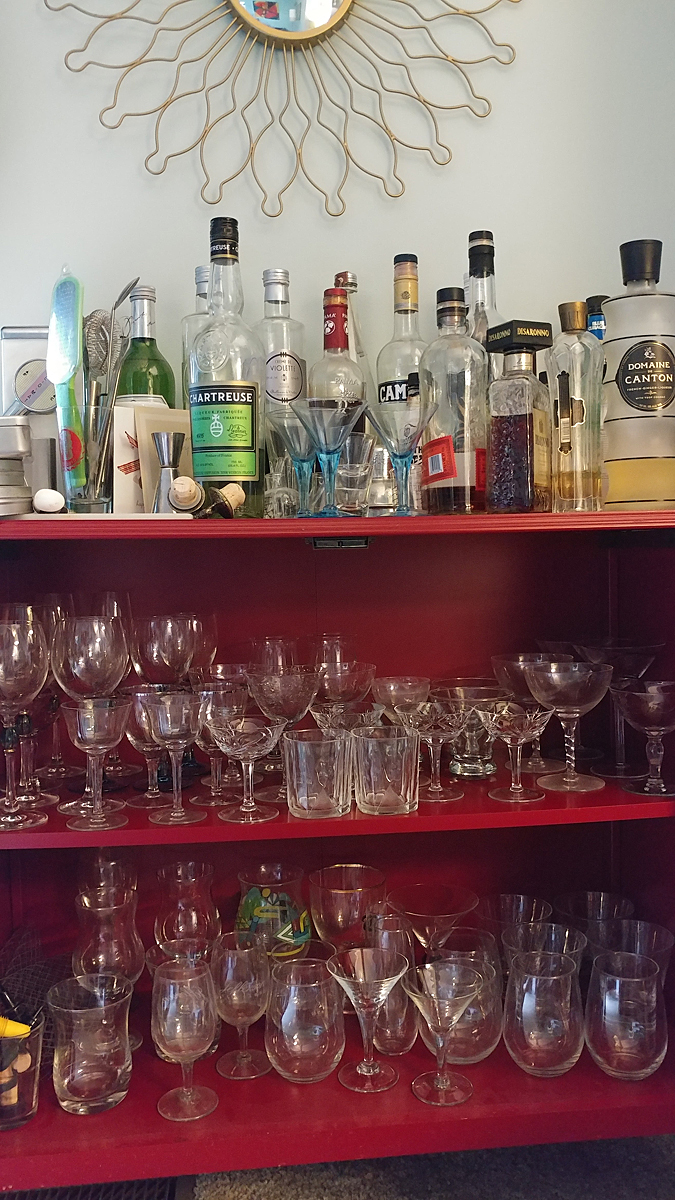 My views are kind of like how our country was set up. When the large group working together can do the best job, okay. When a smaller group works better for some of the jobs, okay. When new is safer and cleaner, okay. When old is still good and serviceable and frugal, okay. What my neighbors do inside their house doesn’t harm me; what they spray on their lawn might. 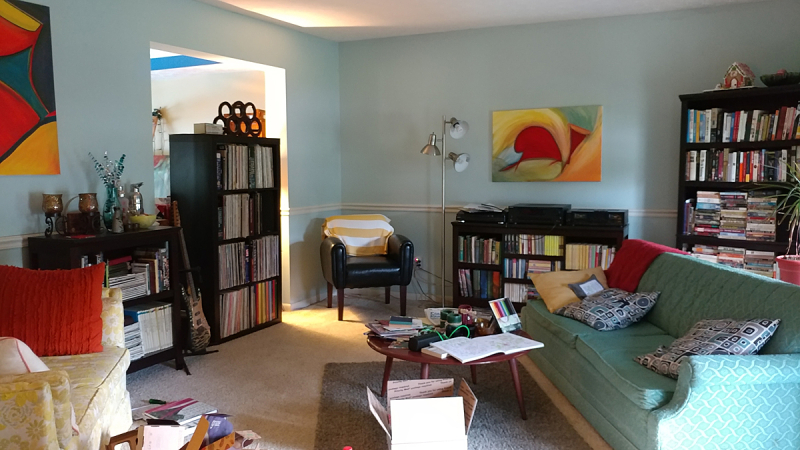 Social justice demands personal context, and that’s so often missing; it’s no wonder people think they disagree even more often than they actually do. It also demands that people stop looking at everything as though we’re in a stadium cheering or booing the other side. We have to live life on the playing fields, not shouting across them from the stands.

For example, I dislike the term "privilege" and how it's tossed out all over the place, but lately I've been noticing that many people who use it completely ignore their own levels of it, and would be surprised if you pointed it out. They are so certain of the issues they tweet about or make “memes” for, they sometimes disregard other concerns right in front of their faces.

Yesterday, this "ironic" Goodwill date thing popped into my Facebook stream again. Maybe you've heard of it. The couple gives each other a $10 limit to buy ugly clothes at Goodwill that they then wear on their date. This particular couple wore late 80s-looking attire and gave each other fake names to maximize their amusement.

I don't exactly think it's such a terrible idea. But I go into Goodwill now and then to look for books or old dishes, and I'll poke through the clothes, also St. Vincent de Paul, where all my household/clothing offerings go, and I watch many women spending a long time going through all the clothes, and I know that they are not doing it to be hilarious, but because they need to spend as little as possible.

Thus, I cannot be amused at the idea of people entertaining themselves with poor people clothing. I feel maybe we have a different idea about liberal hearts and minds. Very many of us have had financial troubles. Fewer of us have desperately hoped to find something to fit for a job interview that won't cost the kids' supper tonight, which wasn't going to be all that great anyway. There is a grim anxiety to poverty that clings to a person like air pollution on a humid day. It should hurt you to witness it or even think of it, if you are as liberal as you say.

Notes on a hundred things

The annual landlord visit came and went, rather painlessly. I always get super worked up about it, though, and then need a few days to decompress.

The pool is still leaking, but we can call for that and have done whatever needs doing. 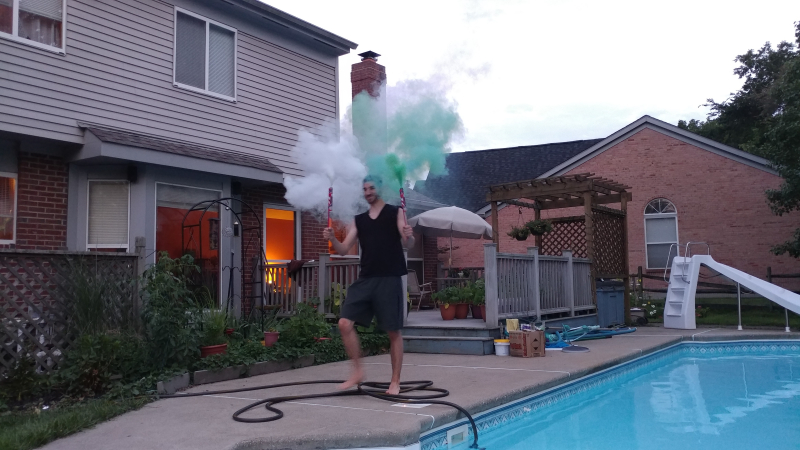 I’m on Day…24 of this 28 day eating plan. The purpose of it renders it no longer a necessity, but if I stopped, my family would be all, “ooh, you didn’t do it right.” Whatever. Here’s the thing. I wanted to reset my eating thinking, and I have largely done that. So that purpose has been met. At the same time, I have fouled up my enjoyment of simple pleasures in the kitchen, I have no more energy than before, am still sleepy after lunch, have lost no weight and have seen no skin improvement. The book assured me everyone sees all that happening, and it is true in most cases; a no sugar diet will cause you to gain or lose weight as needed. But it has not been true in my case, though I have eaten many fewer calories and exercised more. At the same time, I was supposed to have withdrawal symptoms, headaches, etc., and I had none of that. I was in a bad mood only in regard to having little to enjoy the first few days, and not from sugar deprivation itself.

Looked at that way, I think 24 days has been enough to move forward to “maintenance.” But I’m not going to just eat cake today or anything like that. I’m still going to eat an apple most days; I like their thinking there, though every single day might be too much apple for me. I’m still going to drink a pitcher of water every day, sometimes with a green tea bag in it. I’m still going to do better at snacking when I can, and I might retain their notion of eating a little dark chocolate every day, though I still don’t love it. I have rediscovered my taste for freshly-ground peanuts, however. The red wine recommendation, meh. I’ll try to remember to have some sometimes, and I’ll also think very carefully about what else I’ve eaten in my day before having dessert, which is something I already do before I decide whether it’s a cocktail evening or not. 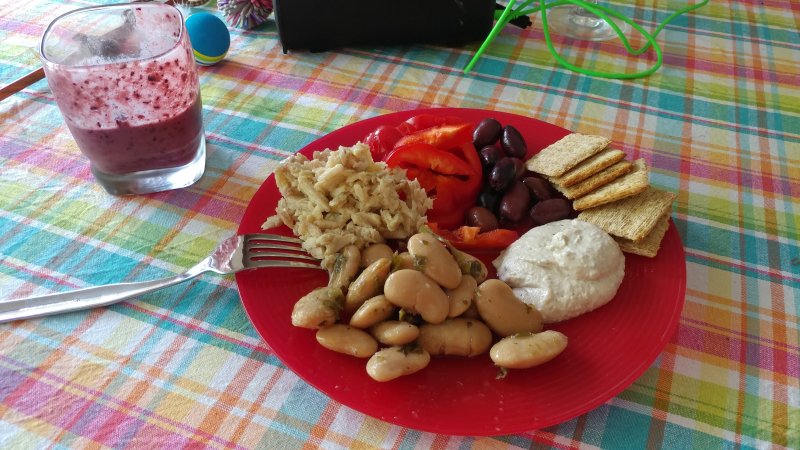 I never craved dessert these past few weeks except sort of once. I really wanted rice pudding the other day, for a reason I just cannot say. When do I ever eat rice pudding? And I can’t say I’ve craved bread, but I’ve missed it a lot. Like to have a little with my olives and ricotta, or to put bread crumbs on top of the baked eggplant. And to eat noodles with eggs for lunch now and then. A natural part of the day, not an overwhelming part. I want that back.

In other areas, I’ve been sewing lots of things. I made a baby quilt top a couple days ago, and yesterday I made this log cabin block with some of the scraps. 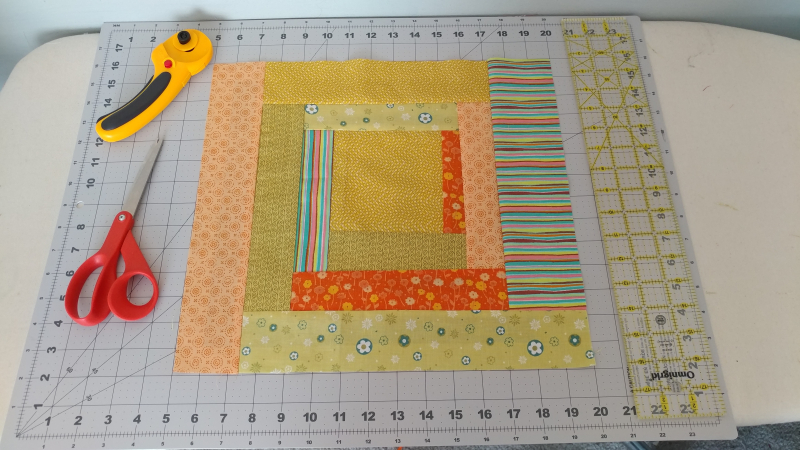 The garden isn’t good at all this year, but is not fully hopeless. There will be a fair number of hot peppers, cherry tomatoes, and lemon cucumbers. A few pickling sized cucumbers, some amount of snap beans, three delicata squash, and a few other tomato varieties, including black prince and…I forget which golden variety. But the Brandywines, which I grew from seed, are sick, and I might have to pull them out later this week. Something ate my meatball eggplant plants, but the baby eggplants on the deck seem okay. I’ll have some carrots soon, and at least a few sweet peppers. I have about twenty garlic bulbs curing in my paint room. 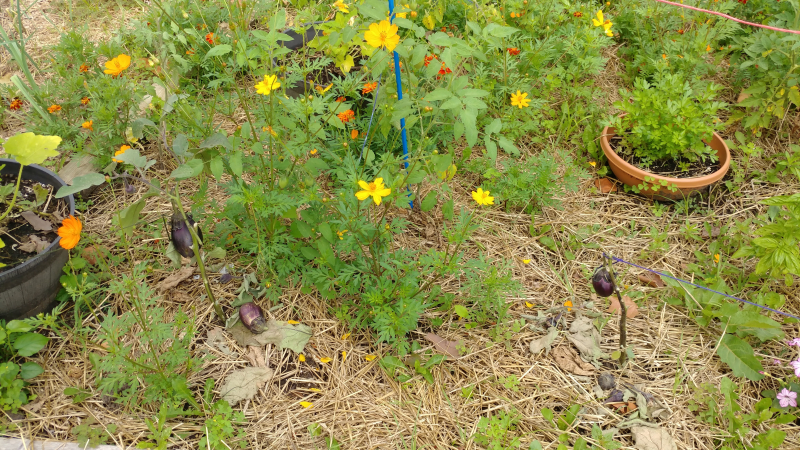 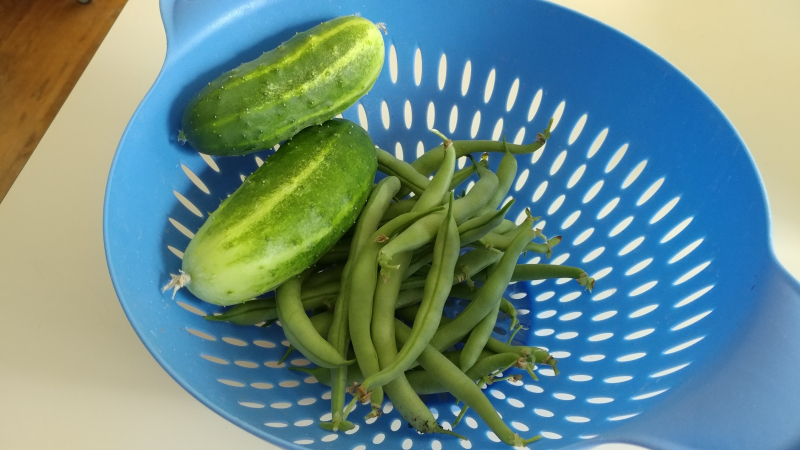 I’m so in love with Twin Peaks: The Return, I can’t always think about anything else.

The kitten staying here is doing very well. Blood tests next week when she’s old enough for them. 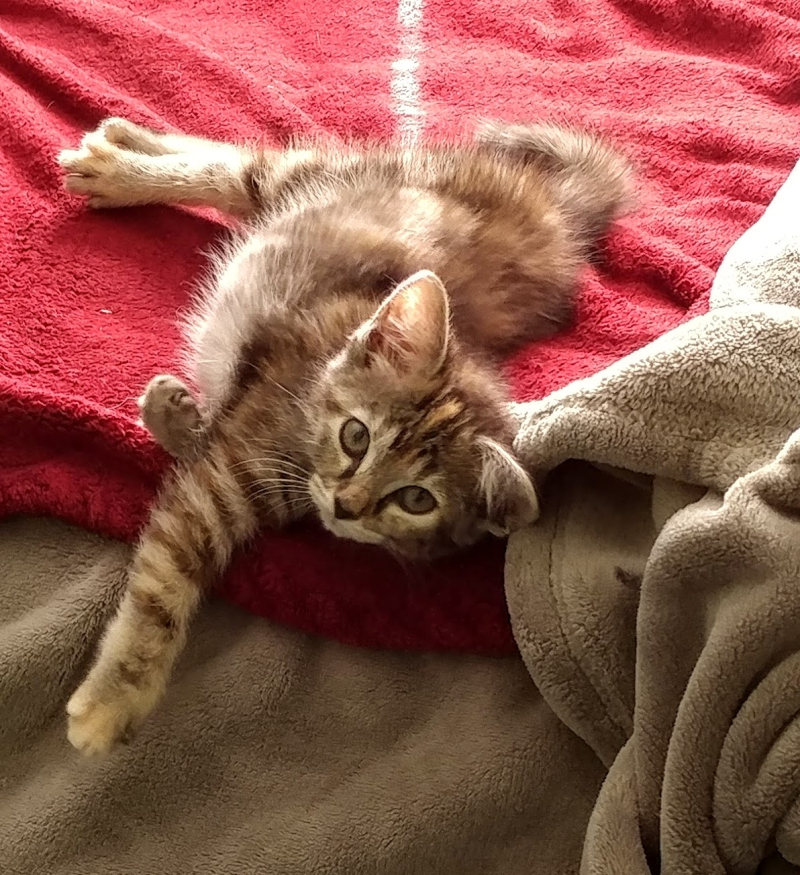 Yesterday I took some accidentally-purchased "lightly sweetened" peach cups (who thinks peaches need sweetening? this is our problem, people,) and turned them into popsicles. 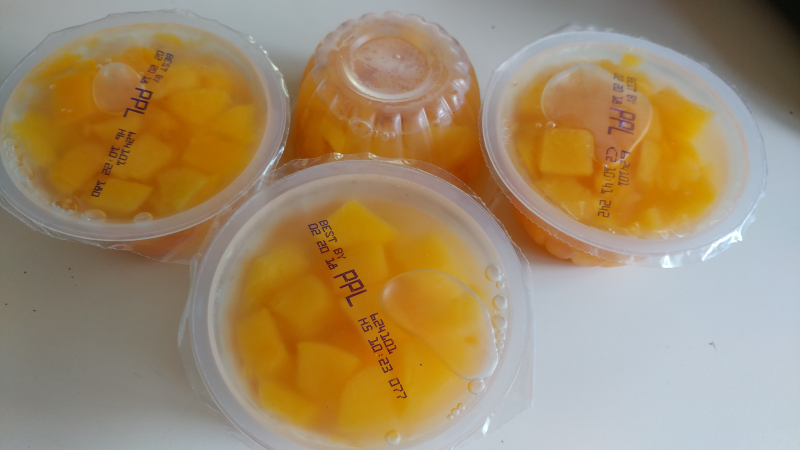 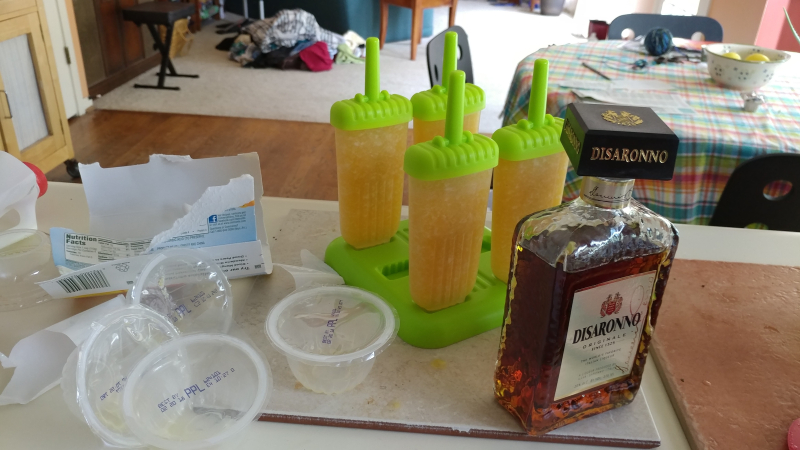 And I made frozen yogurt thusly: one large container Greek Gods plain yogurt into the food processor with an entire cup of sugar (this amount will be reconsidered later,) juice lazily squeezed from two lemons, 2 tbs amaretto, and a touch of salt. I whirred it and then put it into a large ziploc bag in the freezer. Later after it started to freeze, I squished it around every hour for a few, then put it into a container to enjoy…in a few days, I guess. Same with a popsicle. It can wait. 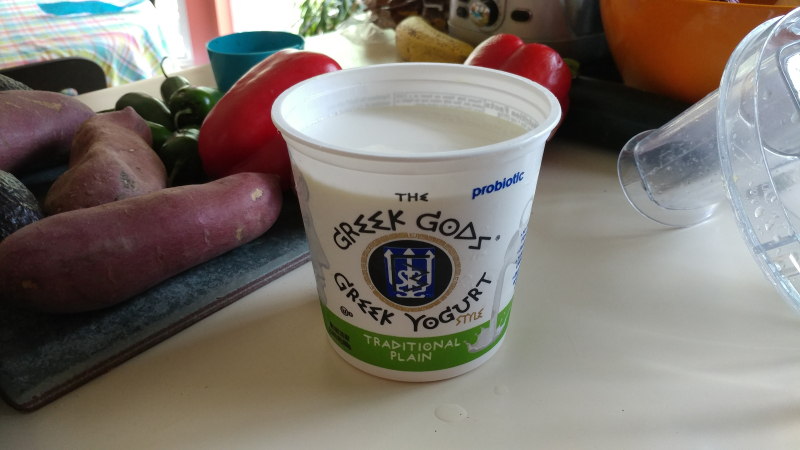 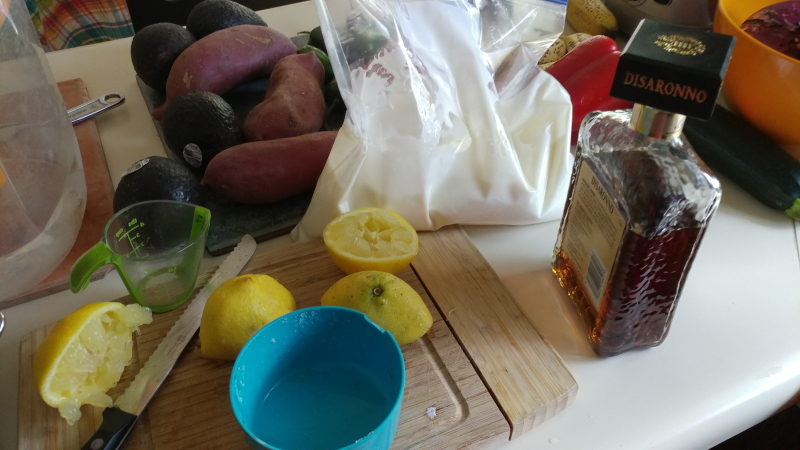 Finally, here is the pictorial saga of my frozen vegetable dumplings and the sauce that would never end. 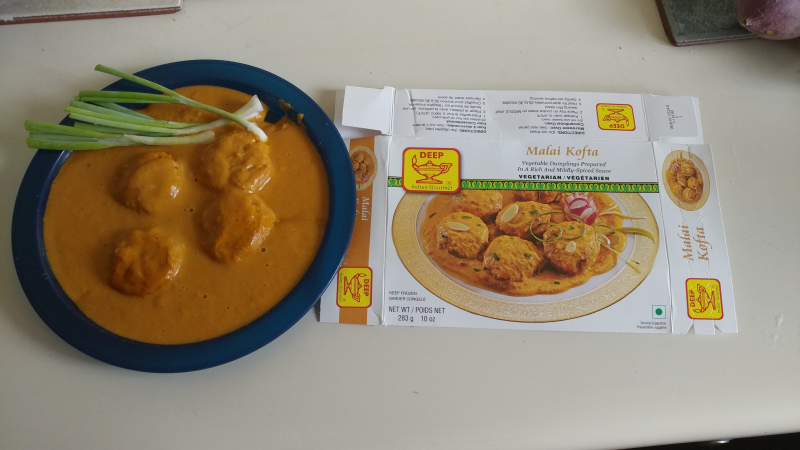 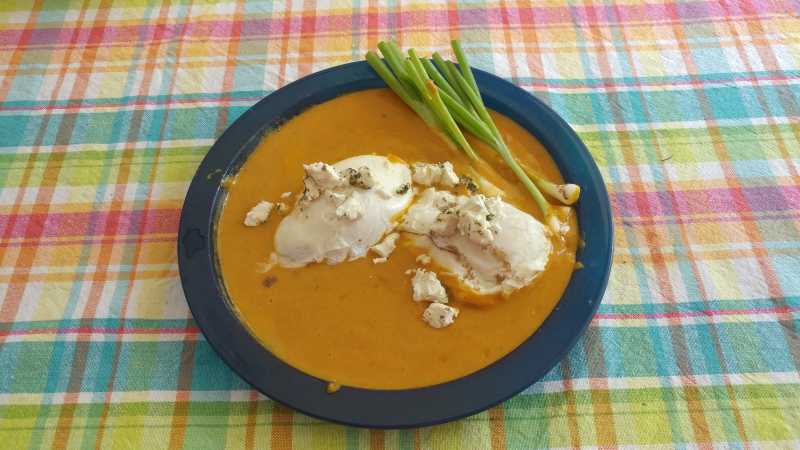 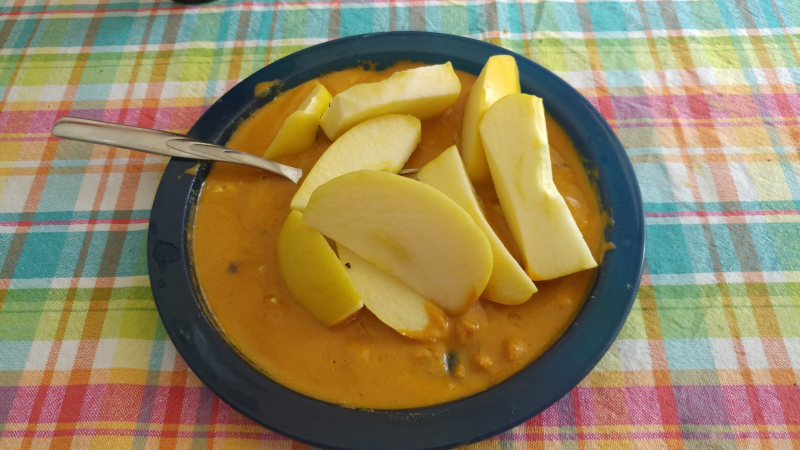 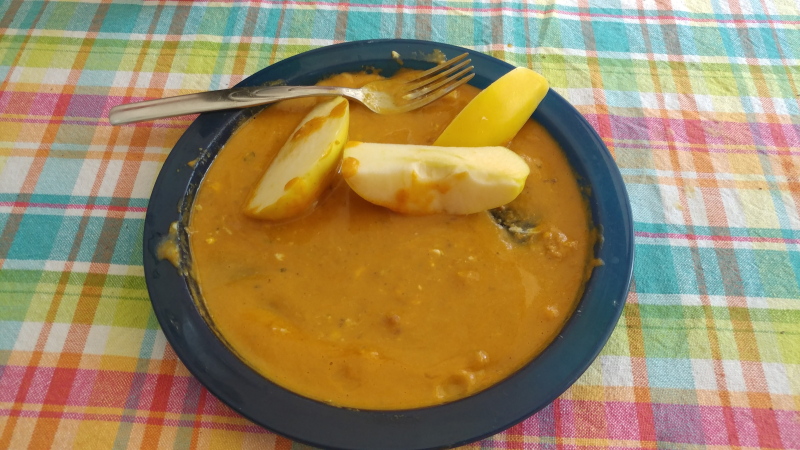 Enough apple already. Wouldn't a piece of flat bread have tasted good with that sauce?