“Being a man given to oratory and high principles, he enjoyed the sound of his own vocabulary and the warmth of his own virtue.”
Half an hour spent with “social media” this morning was enough to renew the simmering and dismissive rage of three or four Sinclair Lewis novels, but it does no good. I have neither the talent nor the tenacity to do what he did 80 and 90 years ago, and what if I did? People rarely recognize their own folly; preferring to focus on that of others. I railed for months last year about Buzz Windrip, but I have a tiny voice and this is a real big world.
Along a more pleasant train track of thought, it’s symphony season, so I have a reason to be at interesting restaurants once a month for the next few. First up was Zula, my personal favorite, a rare treat, and just diagonally across Washington Park from the reopened Music Hall. I took pictures of our shared dinner, not to impress anyone, but to reenjoy later as I like. He goes out to eat as a matter of course and told me I should order whatever I like since I don’t, so I chose the yellowfin tuna crudo, haricots vert with escarole and this and that, romaine hearts with a very nice dressing, beef tartare, and duck breast with sweet potatoes and French lentils. 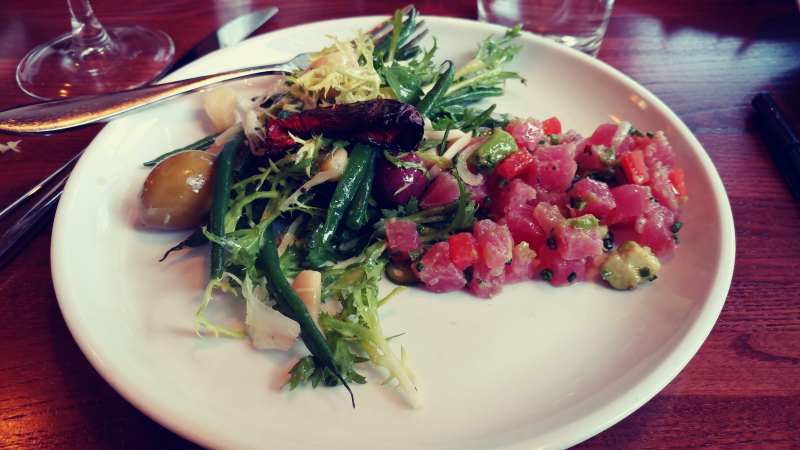 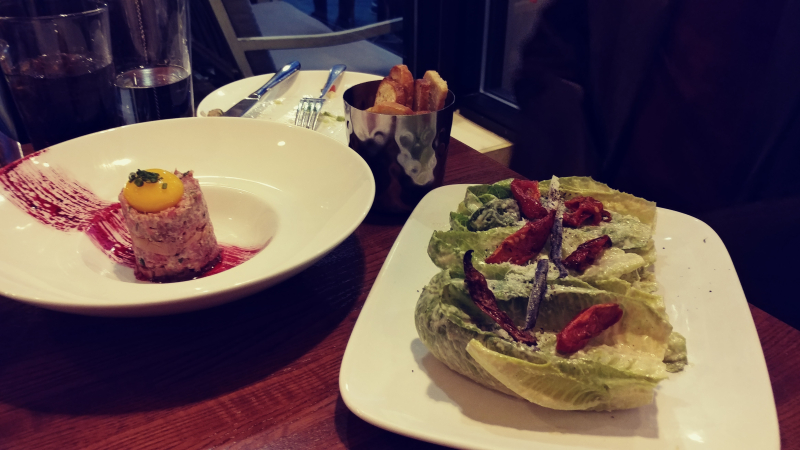 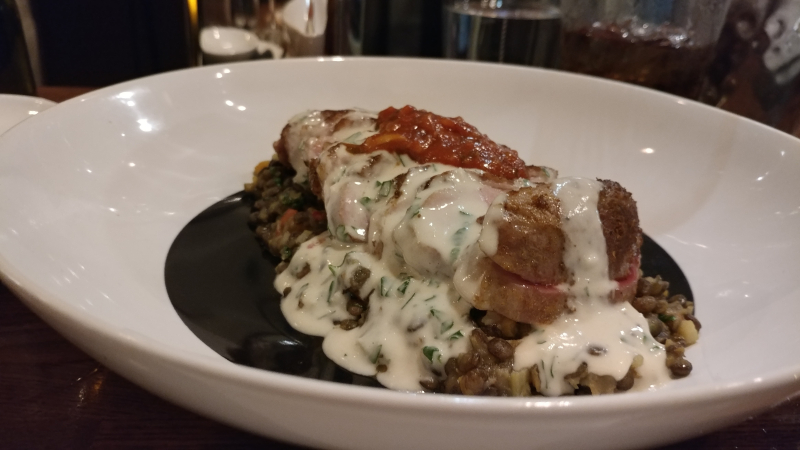 And I had two Corpse Revivers #2, as well. A sumptuous treat. 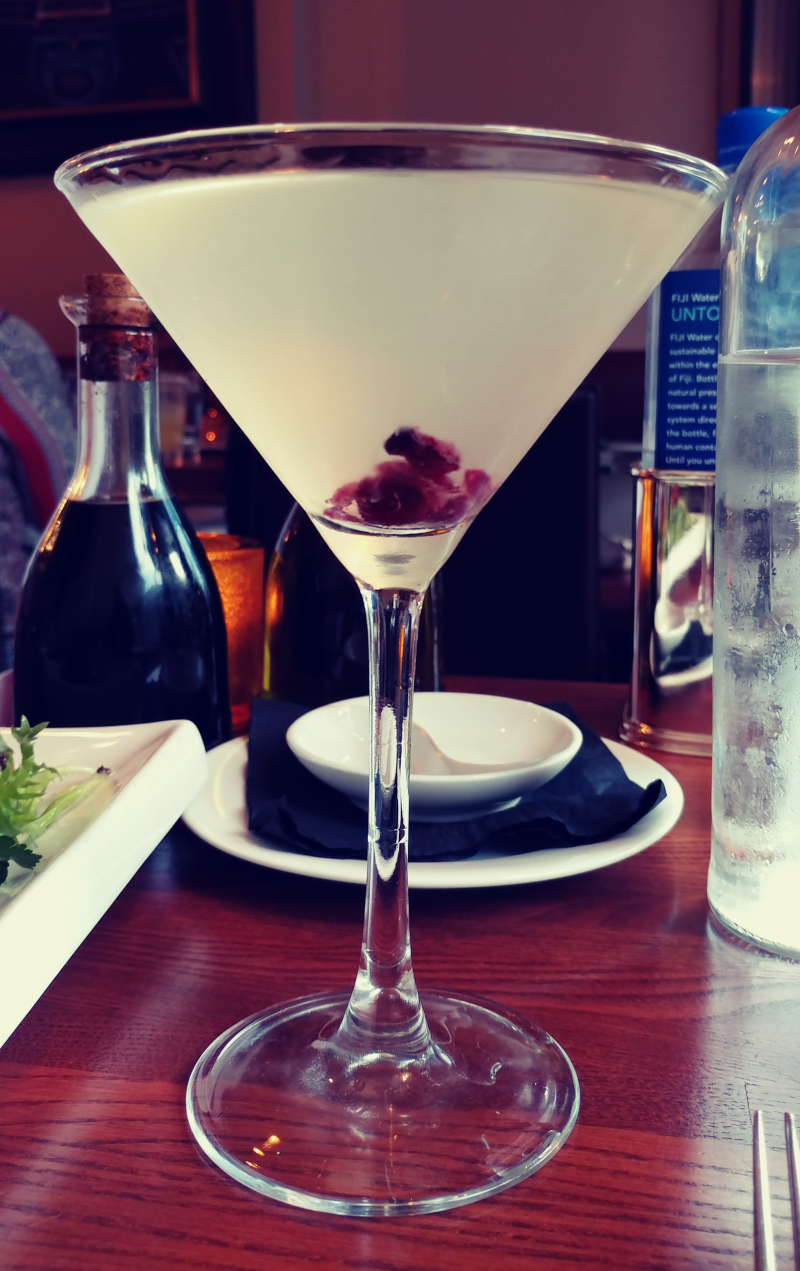 Over at Music Hall, the symphony played Pelléas et Mélisande, with a dreamy minimalist setting for the singers.
We both needed a touch more from that set and the singers’ movement, to be honest, to make a point or two more clear. But the music was lovely, the reconstruction of the building is lovely, and it was just a lovely evening all around. I sigh with pleasure at the memory of my beef tartare, breaking the lovely golden yolk on top, and the giddy sensation of swallowing a perfect food. Here is a filtered photo I took in honor of my old cookbooks with their creepy attempts at elegance. 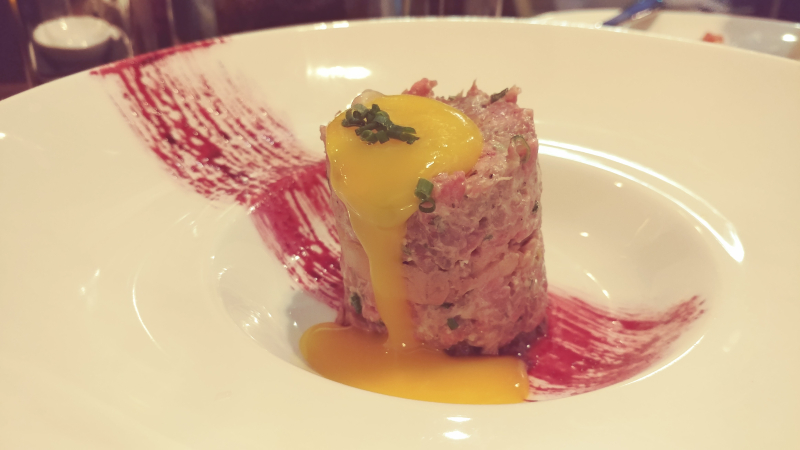 Back to the real world online, this month’s particular demand for social justice is taking a new ugly turn. And the people who don’t take it seriously will never take you seriously if you employ tactics you decry in others.
All of them perceived that American Democracy did not imply any equality of wealth, but did demand a wholesome sameness of thought, dress, painting, morals, and vocabulary.
Oh, but you think the pressure to conform to society comes only from people who can’t see things your way? The new stereotyping is driving me mad, personally. It’s more rigid than ever through the machinations of people who purport to be freeing us from it all. For one example among several: we don’t need sixteen more labels than we had before. We just need people to stop narrowly defining the ones we already have. That includes both you and the people you think are wrong. History and anthropology would teach you that a few other cultures worked this out a long time ago, if you’d take the time to learn some of it.
The demand for equality for everybody and the recognition that we are not all the same, but that’s really okay, will not be met as long as Smugness and Ignorance battle each other on top of messy straw heaps. “She did her work with the thoroughness of a mind which reveres details and never quite understands them.”
And that’s all I have to say about that except here's something personal. I have a neighbor with a 40 foot flag pole atop of which waves a fading American flag. He never lowers it, but never mind about that for now. Beneath it for months last year waved a big black Trump flag. I shuddered every time I went outside.
He also had a beautiful maple tree in the front corner of his lawn, which he maintains to a heightened perfection the likes of which only a Toro ad man could conceive of, and earlier this summer during a storm, a limb broke off that tree and it was cut up and removed. A week later, the entire tree was gone. I was so sad, wondering whether euthanization was truly necessary or if he just couldn’t bear the imperfection of it.
Or maybe he just liked the excuse that he wouldn’t have to vacuum leaves as often. I don’t know. I haven’t asked him.
He’s got a whole life story, you know. He isn’t just a Trumper, and we are all made up of much more than our individual parts can ever suggest. Maybe his ideas about society are all rotten, but he always waves if we’re both out getting the mail at the same time, so he’s also a person, like I am, who likes to acknowledge other persons around him, and maybe someday we’ll exchange something more than pretty politenesses. These days, a black POW/MIA flag that we used to see pretty commonly sits beneath the weather-worn American flag.
This final quotation is from Walt Kelly instead of Sinclair Lewis. I can imagine my neighbor, as a young man back from performing his Service to Our Country, reading Pogo and wondering how to get back to the halcyon world of his childhood.
Traces of nobility, gentleness and courage persist in all people, do what we will to stamp out the trend. So, too, do those characteristics which are ugly…Resolve then, that on this very ground, with small flags waving and tinny blast on tiny trumpets, we shall meet the enemy, and not only may he be ours, he may be us.